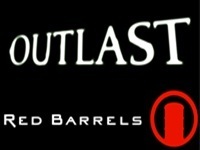 Outlast is a first-person survival-horror game placing you in the mountains of Colorado, where a previously abandoned building called Mount Massive Asylum resides. The transnational Murkoff Corporation recently bought the branch through their “Research and Charity” branch and has begun operations in complete secrecy. You play as Miles Upshur, an independent Journalist who sets out for the facility due to a tip from an inside source. Upon arrival you find clues to the various experiments being conducted, as well as the history of the facility. Armed with only your camera, which can be used for night vision in dark areas, you have no way of fighting off whatever, or whomever, you run into in the game. You will have to run and hide to survive the creatures and people that inhabit the building.

After I finished playing the demo, I got to speak to David Chateauneuf, one of the Co-Founders of Red Barrels, in an attempt to get as much information about Outlast as I could. I was able to get a few answers but most of the questions were met with a wall of confidentiality, which only makes me want to know more. The creatures that you run across in the game are humans who have different mental illnesses, which affect how they act and what threats they hold for you. I had trouble getting passed one at a point because I got blinded while trying to run from him and hit a wall, then again because after I lost him, he returned to patrol the area I first found him at.

The movement system will have you climbing, jumping, sliding, and squeezing past obstacles. When I asked him about the system, David told me that “(Red Barrels) were really inspired by Mirror’s Edge’s style with its movement. So we wanted to make a game that also has you acting on your own in real time to get around obstacles and away from whatever is chasing you.” The game isn’t finished yet and I feel like they’ve already succeeded there. The sprinting system takes a couple steps before you reach full speed, but from there climbing actions and sliding actions become fluid and cinematic, as long as you can press the correct button for the action you want to do. With no button prompts to guide you, you will need to be quick thinking while running away from things, such as in this trailer showcased at PAX East.

As far as the use of the camera in the demo, it was only used as a light source, and would require you to change the batteries in the camera to ensure that were not forced to walk around a dark room with no assistance. David has said that they are still working on ideas for the camera and do not have any solid information to give beyond using it as a light source. The game will feature many puzzles requiring the use of movement skills as well as player deduction.

The Company really knows how to sell their game using the least amount of information possible. The handouts they gave at their booth had blacked out texts like a redacted government file. Or maybe I just get really excited by getting information dangled in front of me and just being beyond my reach. The game will be released for PC in 2013, and may come to other platforms in time. You can check out more information at the Red Barrels Website, you can like them on Facebook, or follow them on Twitter.