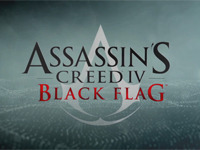 I'll be honest; I have yet to actually play AC III nor any of the 'spin off' titles that launched alongside so I have no clue how well or poorly this new mechanic actually handled in the games. It must have been well received for Ubisoft to churn out another sequel that seems to have a focus a bit on naval combat. Was it?

Now I know that mechanic isn't going to be the entire game, as we can see below. It looks like we will also get all of the wilderness parkouring and British murdering we have come to enjoy over the last stint of the story line. Even though most of them in the trailer kind of look a lot like George Washington, but that's nit picking.

Either way, I do have one last thing to bring up before letting you move onto the trailer proper. Isn't this just an excuse to mix pirates and ninjas into on being? I know ninjas are more than just assassin's for hire, but come on. I can't be the only person who saw this here. Why not just say that the East has the same issue with "Templars" and actually go ninja with Assassin's Creed? I'm sure Desmond's ancestors had to have 'mingled' somewhere during the slave trade that occurred during the construction of the railways in the US. You know it would make sense.