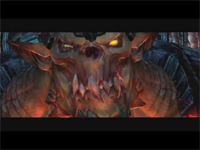 WARNING: This contains loads of spoilers

This list is in no specific order and is not to be taken as a "this is better than that" list.

Here it is the final fight. All that hard work, all that dedication. It all pays off right here. To protect the world, to protect Shana, to protect all life. A long and grueling fight with three different phases. Not to mention the ending cinematic which, at the time, was amazing and well worth the price of admission. If you like RPG's especially long ones, then this one is for you. Not to mention one hell of an explosion.

The betrayer not only kills the main character, but was behind the whole plot the entire time. Now it is up to Gabriel to stop Satan from destroying this world. A sad ending to an epic journey, and part two is on the way!

Words cannot express the raw power and emotional impact of this boss fight. So grand. So epic. From the mechanics to the music that plays in the background. An amazing opening boss fight to one of the best games in years.

After finally beating the team of mavericks, twice, you find your way to Sigma. But first you must fight his pet. After shredding his pet to pieces, it's a battle of wits, skill and speed can you defeat Sigma? What about his second form? You're going to need all four E-Tanks for this fight. Best of luck!

5.) Shadows Of The Damned - Your Girlfriend, Paula.

Yep, that's right. After finally saving your girlfriend from the king of hell, she's not too happy about all the times you let her die and it hits the fan. Not only is Paula a mean bitch after you save her sorry ass, but she's also a mean bitch in the mechanics. How far will you go for love?

My god, if there was ever a fight that truly annoyed the holy hell out of me, it would be Shao Khan. But defeating Shao Khan in the latest Mortal Kombat felt so rewarding, even if he was extremely obnoxious to beat. Plus the story mode in Mortal Kombat was the best, by far.

After spending a solid hour of blasting your way through Mental's minions, you finally make it to the teleporter only to find out it's guarded. Time for some Jetpack fun and an epic conclusion. Such an amazing game, that is seriously under rated with the amount of shovel ware first person shooters out there *cough Medal of Honor cough*

After beating this game at least a dozen times, I finally figured out that I wasn't defeating the real Andross; in fact, I was defeating a god damn robot. But seriously, how epic was that fight? After destroying his "facade" we get to see what he really is; a giant brain with floating eyeballs. This nearly scared the crap out of me.

Fighting Baby Bowser in phase 1 was all fine and dandy but when phase 2 hit, I was never so scared in my entire life. Seeing him just grow, and grow, and grow, and then that legendary riff hits. Forget it man, it's on! Here comes the battle of your life!

DOOM was hard enough as is, but when this guy shows up and eats your rockets like a champ and then shoots rockets back at you! You feel the need to change the color of your underwear. One of the most memorable enemies of any DOOM game.

xrobzix [ Tuesday, 19th of February 2013 - 09:21 PM ]
The boos to deadly premonition, after all the misleading and twists you get to fight this guy seeing him grow and get bigger , slurping your bullets, until you realise you have to shoot the doll in his hands, hard and rewarding to kill him off.
Go ahead and login or register