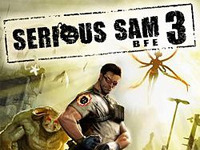 Where do I start with Serious Sam 3? There is so much to talk about and only so much of your patience so I’m going to dive right in to the goods. This is what a First Person Shooter should be. An insane amount of enemies and destruction? Check. Guns, guns, and bigger guns? Check. No filler, balls to the wall action and chaos? Check. What's not to love? Well, let's find out.

I’m going to start off with the negatives in this review, just to get it off my chest. It seems that the XBox 360 is having a hard time rendering the graphics on Serious Sam 3, to the point where even audio is affected. Nothing brings you out of the moment faster than when a cut scene hits and there is no audio or voice overs for a good three seconds. Through all the madness and chaos I've also seen a bit of frame rate drops, some of which were really bad.

The graphics compared to the PC version is a “no contest.” The PC graphics are a hundred times better. I guess the 360 is really starting to show its age. While the 360 graphics are still good, I feel like Croteam had to dumb down a lot of the settings just to make it playable. Now don’t let this discourage you, the levels are all amazingly beautiful, and highly detailed. Not to mention that their size gets exponentially bigger as you progress in the game.

Let's talk about the campaign. The campaign has twelve missions with the last two being pure insanity. The story starts off when Sam “Serious” Stone is flying over Egypt to find a way to turn on a time machine that was recently discovered. Sam’s helicopter gets shot down and now he must travel the rest of the way by foot. This means endless hordes of enemies, guns, big guns, and even bigger guns, as well as enough secrets to keep the FBI busy for a solid month.

There are some other modes as well, Survival being one of them. Not much to say here, it's pretty self explanatory. If you love the increasing blood lust and chaos of a fire fight in Serious Sam, then this mode is right up your alley. How long can you last before things get “Too Serious?” I have not spent much time on this mode, but I can promise you I will be unloading a few dozen hours into that mode.

The music is pretty heavy, but can get tedious as you progress through the game. Having a fight theme is cool and all, but only having two or three different ones can get quite tiring. Especially if all you are going to be doing is fighting. If you don’t like heavy metal riffs or Egyptian themed music then you might want to save your sanity by playing without the music.

Personally, I had a blast playing Serious Sam 3, especially that final level. I found myself talking trash to my TV and taunting seemingly endless waves of enemies by asking if they would “like some more!?” or “Catchya later Bill and Ted!” or my personal favorite “Haiiiiiooooooooo!!!” There must have been at least fifteen-hundred enemies in that level and then after ALL that insanity Croteam gives you one last kick to the family jewels and let's loose a gigantic final boss.

If you’re sick of the cover-based, military, super serious, modern day FPS, then Serious Sam 3 is a breath of fresh air, with plenty of one liner’s, puns and trash talk to satisfy any action movie fan. Introducing melee weapons as a more prominent way to slaughter my foes or having a bigger influence in my weapon choice would've been much appreciated. Katana? Chainsaw? Baseball bat? All would be nice ammo savers for the big enemies that lay just around the corner.

Having grenades of some sort would definitely be a warm welcome to the franchise. Having more enemy and weapon variety would be nice as well, seeing as the same enemies and weapons have been in the games franchise since the beginning with only a few exceptions. It would also be great to have a more “epic” feel to the game. Croteam did add "Melee kills" to Serious Sam 3, but I feel it's lacking. It would be damn nice to smack a Kleer in the face with the butt of my shotgun as it tried to rip my face off.

God, am I REALLY going to say this? Yes. YES I AM. Croteam did an amazing job on Serious Sam 3, but I know they can do better. They can definitely make their next installment a million times more insane, with thousands upon thousands of more enemies, and hundreds and hundreds of new guns. I just hope they're not afraid to bring more “epic moments” to the table.

Serious Sam 3: BFE was developed by Croteam and published by Devolver Digital. Released on XBLA October 17th 2012. A copy was personally purchased online. I played on Normal and got my ass handed to me.