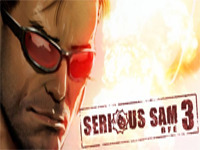 Croteam said earlier in the year that Serious Sam 3 would be coming to Xbox 360 / XBLA around September, and it looks like they're right on schedule. As for the PS3 owners, I have some bad news: Serious Sam 3 might not reach PS3 / PSN in 2012, but maybe early 2013.

Croteam has also announced the first DLC for Serious Sam 3, which should be hitting PC in October. The new DLC will feature three new campaign missions that follow Sam as he explores the Temple of Isis on the island of Philae. Two of the secret weapons in Serious Sam 3 will finally be in the spotlight in this DLC, making them normal weapons, the Laser Gun and Sniper Rifle.