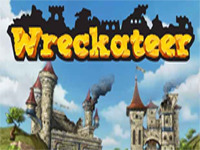 Alright, well let's start off with the game play. The game play is fun and easy to learn. During the first level, which is the tutorial level, your buddies Wreck and Tinker have hired you to help them destroy castles. Loading the catapult is pretty easy: just step forward and put your hands together, then step back to load up some power. Throwing your arms out to your sides will cause the catapult to fire, then depending on the shot (Basic, Flying, Speed, Explosive and Chain) you use your hands to guide it to your destination. Every shot except the basic shot can be activated by putting your arms up in a "V" formation (Think the YMCA song with the letter Y) and the only shot that can be activated after an impact is the explosive shot.

The only issues I really had with the game were with the flying shot and the overall destruction in game. There are times where a tower would fall over onto a wall and the wall wouldn't get destroyed, rather the tower would just destroy itself on the wall. You'd be lucky if it caused some damage. The physics in Wreckateer also has some "What the fuck?" moments, like having a bridge with four pillars defy gravity and still stand when only one pillar is still up. Or having a wall of a castle not fall even though it's being held up by a sliver of concrete. I also had issues with the flying shot where sometimes it was a bit wonky. For instance: if you put your arms too high up, when you're flying upwards, the shot can reset itself and you'll just either skyrocket downwards or spiral down into oblivion. Later on I discovered that the highest you can go with the flying shot is the "V" formation, any higher and you're taking a huge risk.

With ten worlds of ever increasing difficulty, five levels and a challenge level per each world, you will have hours upon hours of great fun with Wreckateer. It's truly a great game with a few minor flaws that is holding it back from perfection. You can pick up Wreckateer on XBLA for 800 MSP, but make sure you have a Kinect.

If you are worried about the accuracy for Wreckateer then you can stop. Because the accuracy is top notch, without it, this game would've simply crashed and burned.

Wreckateer was developed by Iron Galaxy Studios and published by Microsoft Studios on July 25th, 2012 for Xbox 360. A copy of the game was personally purchased from XBLA for review purposes.