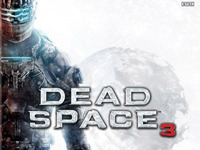 While originally this was shown behind closed doors at the show, recently the game's Executive Producer (Steve Papoutsis) posted a video showcasing exactly everything we all got to see on the show floor. I was nice enough to include the 20 minute game play footage show casing the single player and co-op for you below. While some of the actions are a bit differently controlled from what I've seen, I can assure you this is all the same areas and footage we press got to see.

Before you rush off let me go over a couple of the cool things that I found in the demo that I got a bit more answers on.

First the game offers drop in/out co-op. This will change how the story's narrative plays out thus giving you a different story and game play path based on if you play solo or with a friend. In the video there is a scene where Isaac during solo play runs to a part of the station where John is fighting off a giant necromorph that forces him to go one way and completely changes how Isaac has to move forward. They re-play the scene in co-op and John and Isaac find another way together. This is also not to mention that each in-game movie looks to have been taken into account in regards to being in co-op or not. Watch the elevator scene and you can see how Isaac in solo has to struggle to climb back in while attacked where in co-op he is saved by John.

It is also worth mentioning that it looks like Visceral is take a few notes from Silent Hill and using fog more than darkness. It is just one more place for necromorphs to jump out randomly. Also there are the snow banks as well. I am also assuming that the normal franchise staples will be included too so we will all have to be on our toes quite a bit more. Something that totally adds to the intensity of the horror genre and having us all screaming like little girls and changing our pants.

Lastly so you can just move on to the video, you will also be taking on human enemies as well as the necromorphs in DS3. The Unitologists are hunting down Isaac and John for their own insane reasons linking from the events of Dead Space 2. These enemies look to have smarter AI as they are higher function life forms. So while you still have to worry about the lumbering necromorphs you will also have to worry about all the humans taking cover and trying to out maneuver you in the field.

Now I'll be quiet so you can watch what I've seen for yourself. Worth mentioning is the mini boss fight with the drill. On the larger screen with a massive sound system this was insanely intense. You might not be able to get the full sense of it from YouTube, but I still live by the quote that they made a fight with a drill so damn exciting. Now go watch and wait until February 2013 for Dead Space 3 to hit your PS3s, XBoxes and PCs.

SnappyDude [ Monday, 25th of June 2012 - 09:00 PM ]
:) from the demo I watched all i could think was wow this looks like COD action with coop dropped into lost planet and nothing that I want in a Dead Space title. :)
Go ahead and login or register