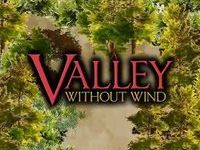 One thing about A Valley Without Wind is that when your character dies, it’s dead for good. You must start back at level 1 with a new character. You keep your inventory and all explored areas remain explored, but you must level up your stats again. It’s not amazingly hard to level in this, just time consuming and takes a bit of knowing your enemy. The maps while are side scrolling have very in depth dungeons; generally presented in the way of houses, sheds and wells; by use of a room system. Fast travel is made by unique "warp gates" caused by the fracture in space time (More on that in a second) which will transport you to a smoky looking room filled with the various warps you have found thus far. Enemies are highly varied from giant wasps and bears, to wisps and electric orbs and various shapes of goo and things. Some are quite easy at any level, others are quick and very strong and much be avoided until higher levels are achieved. The loot dropped by enemies is generally experience orbs and health based on difficulty some will drop things needed however.

The games story revolves around an incident, a mysterious cataclysm involving a time fracture. Ice ages, droughts, and ancient and modern times collide and only you and a few others called Glyphbearers can do anything about it. Refugees and other Glyphbearers can be found in encampments and villages which you have to repair and build up by beating levels and grabbing resources for it. At the various camps there are survivors, fellow Glyphbearers and giant crystals all of which can give you hints of where to go, and glimpses into the story, and what happened.

The UI of A Valley Without Wind is reminiscent of MMOs though it has its own feel as well as an overhead map on each game world to show what rooms you have been to, and how much you have explored. After completing the first area, which happens to be the only linear area for introduction reasons, you can explore the world map. It is broke into a grid and shows castles, deserts, snow plains, and seas. There are also areas in a windstorm where you will have a constant drain on your life. EVEN.WHILE. INSIDE. Don’t go here unless you are well equipped and experienced. You have mission zones and Boss zones as well, where you have some kind of reason and goal at the end.

The combat in A Valley Without Wind is much like your classic Metroidvania games with magic and spells instead of whips and missiles, and is based around mana. You have your 1-9 keys for your presets, as well as your 3 mouse buttons to attack, defend and set down platforms for climbing. Enemies have about the same things as well. The magic in the game ranges from melee to ranged to area-of-effects and you can build your characters to your liking and is very open to customization. The game is built to allow you complete control over where your skills and powers go, and what kind of character you want. There are 3 inventories just for keeping you camps goods, your spells, items and powers, and another for your armor. The game has a menu for your goals and what you would like to stockpile. It has everything nicely sorted out for you.

The only drawback on this game is at times can feel a bit grindy if you don’t have a set goal or idea what you want. Imagine playing Castlevania if you only went back and forth leveling without ever going to kill Beelzebub or the Doppelganger. It can get like that quickly if you don’t have an idea of what you are doing. The huge upside is the hands-on approach Arcen has taken with the community and its fans. Any questions or comments you might have will be looked at seriously and some have even saw fixes the next day based on issues they have had. The team is great, and always responds fast to everything. I highly recommend everyone at least TRY this game, as there is a demo on their site.

A Valley Without Wind was developed and published by Arcen Games on April 24th 2012 for the PC. A a copy of the game was supplied by the publisher for reviewing purposes.