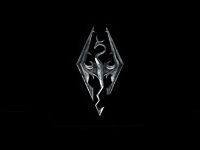 I am so ready for this. Even the trailer is sexy and sleek. You've got story line, new features and a whole new world to explore. The best part about the whole trailer is that the Vampires are looking for the Elder Scrolls, so the tie in to the story line should be epic.

This whole thing is only going to cost 1600 Microsoft Point on XBox Live on June 26th or $20 on everything else. Now there is something that is interesting, and that is that for the past seven months PC Skyrim has gotten all the attention, but with Dawnguard - they will actually be performing the Beta test on XBox Live. Why is this you may ask? Well that's because XBox will be getting the content first, PC and PS3 owners will get the content 30 days later.

What?!? PC has to wait? Most Dishonorable Dovakhin. Deal with it guys. We have the content creator, 30 days won't kill us. Go play with Wheatley for a bit.

So for those players, and I know you're out there, you've listened to the podcast, that's why your reading this, will you be picking up the new DLC? Has Skyrim lost its magic with all the titles announced for E3? I want to hear what you guys think. Don't be shy. I'll be gentle.