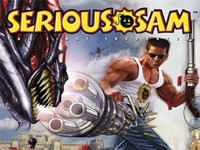 "Regarding Xbox 360 SS3, it is in development, so we are on it since PC was released... It does require time to do all kinds of optimization's, first to fit all in memory and to get decent frame rate, as 360 is rather old hardware now (512MB RAM, lower range graphics card etc).

Please be patient for around 4 more months for 360, we are doing our best to finish it in that time frame.

We will then see what can be done with the PS3, as it has 256MB+256MB memory specs, which programmers here will have to do even more programming and optimization work to get it right."-Croteam (via Croteam's Facebook page)

Croteam has also announced DLC for Serious Sam HD: The Second Encounter, which was released back in April of 2010. This includes three new campaign missions, three new survival maps, three new versus maps and "Free-to-play-FOREVER" versus and survival multiplayer

"Our team is very excited to extend the world of the classic Serious Sam: The Second Encounter and we think the fans will really enjoy the new areas and scenarios we've put into Legend of the Beast" -Davor Hunski, Chief Creative Guy at Croteam.

It's really surprising, and also really good, to see a developer go back to their old games and release new content for it. I'm seriously shocked right now.

"Starting May 15th Croteam and Devolver Digital will be making all Serious Sam HD: The Second Encounter's versus and survivor multiplayer modes free-to-play via Steam. At no extra charge. Permanently. Versus and Survivor modes include: Capture The Flag, Deathmatch, Team Deathmatch, Instant Kill, Last Man Standing, My Burden, Survival and Team Survival."

Again, Croteam is blowing my mind. More developers need to follow in their footsteps. Have you got a chance to play Serious Sam? If not then what are you waiting for!? This franchise is AMAZING!