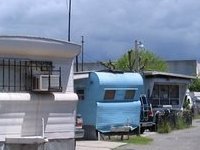 This time I have a few new trailers lined up for you guys. I hope you all enjoy.

Our first trailer today is a new "grind house style" trailer for Grasshopper Manufacture's new game: Lollipop Chainsaw. The trailer features the cliché grind house voice over guy and a scantily clad cheerleader named "Juliet Starling" who just happens to be the main character. Lollipop Chainsaw follows Juliet and her family as they fight off hordes of mindless zombies in her high school. The horde of zombies are controlled by a group of "rock and roll" zombies. Man, this game sounds like a funny, campy and gory good time. I'm sold on this.

Expect Lollipop Chainsaw around March of 2012.

Next up on the list is a new trailer for Digital Extreme's The Darkness II - featuring some very gory and over the top executions. Some of the "artful" executions include a nice homage to the movie "Alien" with chest bursting goodies as well as a sphincter-clenching death that involves one's skull and spinal column being violently removed from a not-so-fun place.

Here are some pre-order bonuses:

A new trailer featuring the gist of the story for Cyber Connect 2's new game Asura's Wrath has been released. This trailer has me even more stoked for this game, which looks completely over the top and 100% insane. The trailer shows the beginnings of the story as it unfolds within Asura's Wrath including some setups, betrayals and the main character falling to earth from space.

Next up is a new trailer for Croteam's Serious Sam 3: BFE - showcasing all the guns within the game and each weapon's destructive force. Some of the classics from the first two games are returning such as the Minigun, Lazergun, Raptor sniper rifle and the Cannon. Serious Sam 3 is also introducing melee combat within the Serious Sam franchise. If you want some over the top, run and gun, old school shooter style, then this game is right up your alley, a nice break from the super serious and realistic military shooters.

Serious Sam 3: BFE comes out on PC November 22nd, 2011. Sadly no release date for consoles has been announced as of yet.