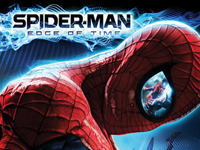 Spider-Man 2099 is swinging along after one of his villains and overhears a horrible world changing plan. The plan being to go back in time and alter the past so that Alchemax, Evil Corporation, is the leader in everything and Stark industries is nothing. He tries to stop it and in the process helps set up events that could get the present day Spider-Man killed by Anti-Venom. Due to some temporal mumbo jumbo, the two can talk to each other "telepathically" as well as alter things in the timeline. The two also join together to make sure that none of the changes happened in the first place and Alchemax's monopoly Biff's Casino is never built.

I will start this off with how damn repetitive everything in the game is. Swing here. Fight. Crawl here. Fight. Then fight some more. Rinse. Repeat.

I will actually blame this on all of the gamers out there who whined about the game play of the Noir Spider Man in Shattered Dimensions. I wasn't a fan of the game play of that world but it offered a break in the button mashing combat. Edge Of Time does not get any breaks in the combat at all and that becomes extremely monotonous and boring really fast. I actually got to the point where I wanted a length cut scene just so I had something else to do besides spam the attack buttons. Hells, I would have even enjoyed a few more puzzle challenges to give a break from the fighting. But nope, it is like 90% combat. Even the Web Of Challenges are comprised of 'fight this mob getting hit only once' or 'rack up a 30 hit combo in 25 second.' Near the end of the game I had to force myself through the combat just so I could continue to the story.

There also seems to have been no revamping to the wall-crawling from the last game either. It is still pretty damn hard to crawl anywhere with any accuracy. That is except for the parts where all you can do is crawl and the game will make Spidie turn and move for you. Granted there is not much that you need to crawl for, but when you do, dear gods the frustration. Maybe in the next game they will look at these issues and make improvements.

I am surprised to say that even though this is a time travel story it still is pretty damn good. It even has a decent twist that is not as predictable given the time travel stuff. Granted it could be my want for something else besides mindless button spamming, but I think if I was just shown the story I would have enjoyed it just as much. It fit really well for the characters and the universes it was set in.

I will have to add in that while it was a pain at times, the web slinging got a bit of an improvement over the last Spider-Man title. At least as it goes in the form of the quick slinging. I'm talking the zip line effect for those in the know. The range as well as the accuracy of where you can sling too. At some points it does get a little confusing because there are so many options to zip to, but in this case having more is better. It does lend to strategies when in the constant grind of combat.

In the end, should you play Spider-Man: Edge Of Time? Sure. It is not a horrible game in the least bit, even though it does get very repetitive at times. I do mean repetitive. But the story that is being told through the game is better than a lot of those you get in the comics. I do not see this as a need to buy for anyone but the most hardcore of Spider-Man fans, but if you have the time and the price of a rental sitting around, it is worth at least the time it would take to read the 20 comics worth of story here.

Spider-Man: Edge Of Time was developed by Beenox and published by Activision on October 4th 2011 for the 3DS, DS, PS3, Wii and 360. A copy of the game was supplied by the publisher for review purposes.