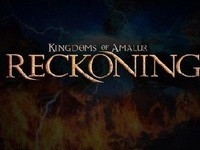 Players can expect a good solid amount of game play in the Faelands. Doing the main quest line alone, you're probably shooting for about 30 hours powering through it. Side quests should add a decent amount to the length. The world is gigantic so your experiences will most likely be based off how much you want to explore. With over 120 dungeons and 5 separate areas to cruise around in, it could be hundreds of hours before you complete everything in game.

Players can also look forward to a very involved crafting system. Blacksmithing was highlighted at E3 - where players could actually salvage items by using this craft, then use those components to build other weapons. KoA: Reckoning also has a very customizable character creation system along with hundreds of armor pieces and weapons to customize your character's look as well. In theory, everything to make a great RPG.

Underneath this deep RPG world is a real-time combat system. It's a fully integrated fighting game engine with an extensive RPG game layered on top of it. Action players will be able to enjoy this just as much as the story-driven players.

I'm really excited for Kingdoms of Amalur: Reckoning and have been since San Diego Comic-Con 2010. This could be the RPG of 2012 in my honest opinion. Kingdoms of Amalur: Reckoning will be released in 2012 on PC, Xbox 360 and PS3, which is good to see that they are not rushing it! Hopefully we'll get some more news on the MMO as they get closer to finishing this title, but for now, I'm content.