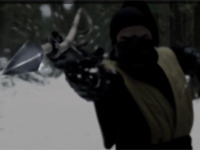 Wait… What…? That is the basic canon of the Mortal Kombat universe? It wasn't something amazingly awesome thought up by the people who wrote something amazing to get the WB behind this little web series? Damn… I was really hoping for something here.

Now that my sarcasm has been given the chance to be out in the open for the day, let's move on.

So here we are in the eighth episode of the series and still only one real deviation from the already set story. It is the conclusion to the Scorpion/Sub Zero story that we have grown use to since it was first told. Except that this time it seriously looks like "Quan Zero" was kind of phoning it in as, and correct me if you don't see it, he looked to be wearing a sweater and sweat pants under everything. The whole fight I swear it looked like a horrid cos-play versus a great one.

I do have to say that the way Scorpion's "harpoon" attack was performed brought a bit of the real into things. That's a good thing. It made way more since than the original film's hand splitting attack. Visually not as cool, but this explains why Scorpion is able to get the move off with such speed. Kudos there.