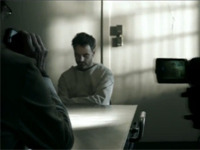 This week's episode features Raiden who seems to have fallen out of power and into the grounds of a mental institution. For some reason he has lost almost all of his powers but retains the memories of being a god. As we all know, claiming to be a god on the streets is something that will get you a padded room. Even if it is a true claim. That is also what happens to the thunder god here.

I do have to say I am a little confused as to why he doesn't just summon up a little bit of strength and walk on out as he shows the ability to endure everything else. I also find it a little bit of a stretch that in a mental facility it took him over 90 days to find someone willing to "kill him." I guess the really violent ones would most likely be locked up in other areas, but "Lord Raiden" was deemed one of those violent types. So who knows?

I'm just glad that there is finally something that resembles the original short here. Even though it does have a bit of mysticism mixed in, it felt like it was just enough. Now if only the last few could stay in this view of the universe they might be able to end on a high note. Doubtful, but it could happen. This has been the best episode yet in my opinion.

SnappyDude [ Thursday, 26th of May 2011 - 12:07 AM ]
taking this raiden with what the original concept video had the series would of been epic. not sure why they had this awesome concept and they went so far from it
Go ahead and login or register