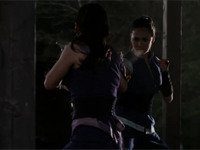 Anyway, this episode continues the animatic and story of Kitana and Mileena that was approached in last week's episode. It has the girls vying for their "father's" approval by fighting each other and following out assassination plots. Granted it is all a ploy to make sure that Kitana never learns the truth even though she does in normal storytelling fashion.

I won't spoil any more, not that I could as it is following the main story from the game, but we get to see when Shao Kahn decided to go after Earthrealm. With only a few more episodes to go it will be interesting to see how they will fit everything in and not make it feel rushed.