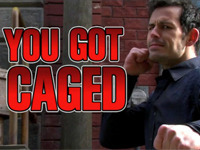 I would love to know why the dirty, realistic gritty version of MK:L seems to have been abandoned though. Yea it is nice to see where JC is coming from and why he turned to "vigilantism" and thusly killed by Baraka, but I am sure this new storyline isn't going to come to the same end as the short. Not to mention the first supernatural element hitting the series that originally seemed to be stemming away from that entirely. At least the first pitch made it seem that way.

I am trying not to judge too soon, but it really feels like the speed boat has started pulling the skier towards the jump. The realism and new twist was what drew a lot of attention so I don't see why there is the need to throw the basic supernatural element from the game back in. I for one wanted a full deviation and Nolan-esque type of series here. It looks like it might just be heading toward the original films style here quickly.

Watch the new video below and see how things are starting to pan out. Then tell us if you like the way things seem to be twisting. Didn't you want the new twist on things? Also don't be alarmed on how it starts. It doesn't have a similar opening as the first two episodes.

Hades [ Thursday, 28th of April 2011 - 06:39 PM ]
Unfortunately from some of the set images I have seen, Shang Tsung is not the only "supernatural" here. From what I've seen, Baraka is nothing like originally pitched. He looks like an Orc and a Troll had a baby...with blades in his arms. Non-surgically grafted blades, but natural. But we are still only 3 episodes in, so we'll see.

VulgarDaClown [ Thursday, 28th of April 2011 - 05:55 PM ]
i liked it, and as long as its only Shang Tsung who has powers, i think it will be fine. in the short/trailer thing no one knew who he was he was an unknown. so it could still be ok. plus i loved the Ed Boon cameo. one last thing you said "nolan-esc" it should be "nolan-esque" not complianing, just helping you out :) great article again, hades
Go ahead and login or register