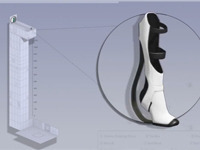 As part of their continued media frenzy leading up to next week's launch, Valve has brought another trailer show casing the special armor and leggings that fix the worry of realism/game play. While it really doesn't serve up more than a basic explanation for sticklers, it is at least fun. Least to mention some more footage of actual game play. Also, they kind of make sense for the kind of real world mirrored in Portal.

No these should be made and part of some "Epic Fan" edition. Make it easier for all those Cos-Players out there who are most likely going to try and mimic these. A world of advice, look into some of the technology for prosthetic legs. The armor looks to have a modified version of the spring used for the running prosthetics. At least they do to me.