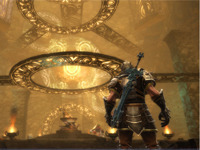 Schilling leads the project with Todd McFarlane, R.A. Salvatore and Ken Rolston, the fantasy team that only this man could afford (Plus a sweet monetary package last year from the RIEDC for creating new high tech jobs in R.I.!) It's hard not to be excited for this beautiful RPG which will also tie us into the story line of another future 38 Studios project; the mysterious Copernicus MMORPG which takes place in the same universe.

This is a title that Single-player fantasy RPG fans will want to keep an eye out for. For those attending PAX East this year, 38 Studios will have its first public live game play demo on Friday March 11th 2011. This has been on our Radar since its official announcement last July. Needless to say I will be the first to welcome the Reckoning.