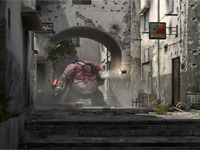 First and foremost, know that Serious Sam 3 will keep all of the original items that made the game what it is. But it is a new iteration, so it also brings on a few more features. If you look below you will see what Croteam wanted to mix into the good old things. New things like enemies and melee attacks, big surprise. There is a nice 16 player co-op listed though, so that should make things a little more interesting. Here's the highlighted list sent on over.

Now that we've gone through the important stuff, here are a few mindless screen shots for those of you out there that might be into that kind of thing. As usual with promotional shots, they look amazing but of course should not define how good the game is going to be.