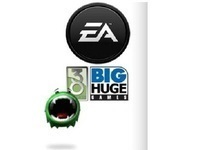 What happens when you bring a former Boston Redsox pitcher, a New York Times best-selling author, the creative mind behind Spawn and the Lead Designer from Elder Scrolls IV: Oblivion? Easy, you get 38 Studios. Founded in 2006 and headed by the former Boston Redsox pitcher Curt Schilling, 38 Studios has their first title Kingdoms Of Amalur: Reckoning coming out later this fall.

With Todd McFarlane (Spawn, McFarlane Toys) heading the Art Direction it is safe to expect nothing short of an amazing looking game. His work at Marvel comics on Spider-Man has left such a deep mark that the Spider-Man we know and love today was partially thanks to Todd. Now don't get things all mixed up, 38 Studios didn't bring Todd into just help out on Kingdoms Of Amalur. Oh no, he is the Executive Art Director.

But the A-list doesn't stop there. Next we got none other than R.A. Salvatore (The Dark Elf, Paths of Darkness, The Hunter's Blades) the mastermind behind Drizzt Do'Urden, one of the fantasy genre's most popular characters. Salvatore has written forty novels that has sold over Fifteen-Million copies. He is also well known for his fast-paced action and sweeping political conflicts across cities, kingdoms and worlds. Salvatore is the Executive Creator of Worlds at 38 Studios, bringing his highly potent character and story development abilities to the table.

Ken Rolston the Lead Designer behind the 3rd and 4th installments of The Elder Scrolls series is also joining this A-team. With more than twenty-five years under his belt in the game design industry and his award winning work on the table top RPG Paranoia. Rolston's experience and abilities are definitely the icing on this cake.

With 38 Studio's roster of heavy hitters their first game Kingdoms Of Amalur has got some big shoes to fill. I believe that 38 Studios can and will fill those shoes. 38 Studios is going to be at GDC 2011 and PaxEast this year. Hopefully some heavily desired info comes out soon. How about you guys? Do you think 38 Studios is going to hit a home-run or are they going to strike out?