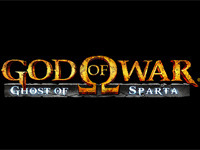 No more spoilers will be mentioned - at least I'll try not to - in the attempt to let you all know how God of War: Ghost of Sparta stands up to the rest of the franchise. I do include all games with that statement. Just as each God of War before, new elements are added into the game play to help keep everything fresh. This is only partially the case in Ghost of Sparta, though. That is, some of the really cool new features from God of War III were added into what was pretty much the game play of GoW: Chains of Olympus. The main feature was the Godly Item concept. Unlike GoWIII though, Kratos only received one item to use, but it functioned in a similar way. Each held a specific kind of magic that has a recharging meter bar. In this case it was the ability to cover Kratos' weapons in fire, which allows him to bring down armor and magical defenses, for a short time.

Another similar game feature brought over was the new way to grapple. GoWIII allows you to grapple with the blades and pull Kratos in, Ghost of Sparta allows Kratos to charge enemies like a linebacker and throw them to the ground to be beaten on. Again, similar concepts done differently. Only downside being that I found it to be pointless to use after the initial tutorial the game gives you on it. Closer to the truth, a skill I forgot about because it was just easier to slash and smash.

Now what I did like was the addition of the shield and spear. Having alternate weapons is not in the least bit new to GoW, but the ability to block and walk is. This also led to a few puzzles and platforming that required its use. The one thing present that is newer to the franchise than anything else, besides the story. While I was not a fan of using the spear for combat, when I was forced to use it for these platforming sections I did enjoy the addition. So with these pseudo-new features, I did find that one thing that is consistent throughout the franchise, but missing here is the explanation on why Kratos is forced to once again build up his power. He is drained of it in every title that needs it, but this one. He is just off the first game when he became a god and starts out with none of the powers he had at the end of God of War. This always seemed to be a great excuse on why he doesn't start out as a god in every other title, but was forgotten here. Just kind of odd that something like this would be missed or overlooked. The God of War should be able to walk through all of these little enemies with great ease, but Ready At Dawn seemed to ignore this.

Another let down was the actual magic that Kratos picks up along the way. Be it the lack of practical use or the way most of it was picked up, it just kind of left me wondering what were they thinking? There is the lightning power that lets Kratos go all Emperor Palpatine on his enemies, but it doesn't stop any of them from moving while Kratos has to stand in one place until all the lighting is let lose. Then there is the ice power, freezing enemies like Medusa's gaze, which you get for breaking a wall of ice. No epic battle. No epic tale on why. Just "Hey you broke a wall you had to break. Here's a freezing power." Seriously? The only magic power worth anything is the one you have to work for by killing the mid-point boss of the game. It creates a ball of energy that sucks the life from enemies and gives it to Kratos, and it floats around to whatever is still living. I guess it is good that the only really good power he had to work for, but it does make me a bit sad that it is really the only power worth using. At least the only one worth while to use when it is not required to be used.

Outside of all of the above issues and features, I found that Ghost of Sparta plays just like every other GoW title out there. Kill a bunch of things. Get a reason to go smash and destroy some location. Kill some more. Plot twist. Kill some more. Encounter final boss after the overall story is finally revealed. Look back at them all and you can see that sum up. That of course leads to the question, is it worth it? The game play and format of the story is quite similar to all of the other titles, but why fix something that isn't all that broken right? For the most part I see this as a continuation of the interactive story that the God of War franchise has really become. Yes each game has had its upgrades and slight changes, but it really comes down to learning all the mythology around Kratos. The developers have done an excellent job in keeping the story fresh and moving even when the game play feels much the same.

If you are a fan of the franchise or have just enjoyed the story being told through the games, Ghost of Sparta is a needed addition to your collection. It further fleshes out the characters of the overall story, not to mention it takes one of the original story arcs in an exciting new direction. If anything it will give you another great reason to keep that PSP charged for some great epic gaming. Here's the story trailer if you want more.

God of War: Ghost of Sparta was developed by Ready At Dawn Studios and published by SCEA on November 2nd 2010 exclusively for the PSP. The game retails for $39.99. A copy of the game was supplied by the publisher for review purposes.