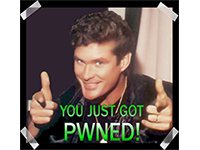 As we all know, PWN or PWNED is a slang term (which belongs to gaming the community) that implies domination or humiliation of a rival, used primarily in the Internet gaming culture to taunt an opponent that has just been soundly defeated. Past tense is sometimes spelled pwnt (pronounced with a t sound) or pwned (with the standard d sound). Examples include "distributing the pwnage" or "you just got pwned". It can also be used, especially by non-gamers, in the context of getting "pwned" by The Man.

In the recent weeks Finnish software company Futuremark Games Studio filed papers on February 26, 2008 to protect the trademark "Pwnage" in relation to:

I only see two reasons why they would want to trademark the word. One, being that they’re trying to make a profit off of anybody who is using the word (which is almost everyone in gaming). Two, being that perhaps they are planning on developing a game based on the word. Even still, trying to trademark a word that you didn’t coin yourself is as ridiculous as attempting to trademark the word "OWNED" from which “PWNED” is derived. Many are saying that Futuremark's reputation will suffer from this stunt, but only time will tell.

All of this follows previously-cool Fark's attempts to trademark "NSFW." I say, let’s file some trademark papers on the words "n00bs," "1337," "hax04," "ROTFL," "LOL," and "pr0n” along with “d0uchage" (thanks Kotaku). The only other famous words or phrases I know of are Donald Trump’s "You’re Fired" and Michael Buffer’s “Let’s get ready to rumble”. Could you imagine if this passes, we’ll have to come up with other words to use…how does, "You Got Crowned" sound? Hey, I never said my jokes were funny. But Seriously, I hope this sad public relations attempt fails.

I found dancinbojangles' comments to ring some truth while being humorous. I even asked our fearless leader Andy from PWND.com what he felt on the issue and he had this to say:

So, if you can think of an awesome game-related word, we can conquer the world with Trademark Domination. We will be richer than Richie Rich! Screw spending money on the Lottery! Never go to a casino again. Perhaps this is the next sure thing!

Every day someone is getting PWNED and PWNED.com wants to be the source you use to read or view the PWNAGE happening across the world. So, thanks for reading my latest article! I am off to trademark some words: TramaPWN, Asshat, Cluster Hump, Spork, Biznatch…