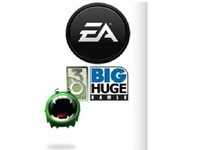 The EA/38 Studios presentation will be on Thursday July 22nd from 1 pm to 2:15 pm, Room 6A. The panel will consist of the entire 38 Studios team including Todd McFarlane, R.A. Salvatore, Ken Rolston, and Founder Curt Schilling. Not much has been said about this ambitious title for some time, when last we saw our heroes they had just signed a publishing deal with EA. Also attendees of the panel will get a limited edition poster, so if you're interested you better show up early, because this is going to be HUGE!

For those that need to be refreshed, 38 Studios is the collaborative project, created and founded by ex-American Major League Baseball right-handed pitcher of the Boston Red Sox, Curt Schilling. Somehow Curt got together some of the greatest talent in media today and said "hey, let's make a video game". With comic artist Todd McFarlane (Spawn), New York Times Bestseller R.A. Salvatore (Forgotten Realms, Drizzt) and Ken Rolston best known for his work on The Elder Scrolls, we should be in for a video game treat that excites and tantalizes the senses. With their powers combined, these visionaries are bringing us two projects, Copernicus the MMOG and Project Mercury their new RPG.

If you can't make it to Comic-Con keep an eye here for all the details, but if you can, keep and eye here anyways.