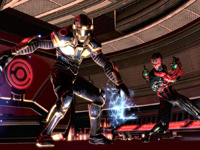 But one question still runs in my head - what dimension is this one? Is it the same Roid-Rage one that the Goblin is seen in? I have no clue. I think I will dub it Dimension McFarlane for now. I mean it would be a good homage to the guy who helped Spider-Man in the late 80's.

I wonder which dimension will be next. Come on Rob Zombie Dimension. Spider-Man Vs. The Devil's Rejects or El Superbeasto would be awesome, but doubtful.

SnappyDude [ Friday, 4th of June 2010 - 10:39 PM ]
anon is right, and i think the goblin is from the black and white spider-man universe,Im very curious to see the last demension so far they all look about as far apart as they could get
Go ahead and login or register