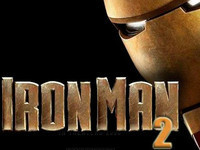 Before we get into the nitty gritty, I do want to warn that this game is based on the film. But only based as in it is in the same world as the film's events and also uses two of the cast for voice overs. Sam Jackson and Don Cheadle would be those voices in case you missed it and don't see it on the case for the game. But that's enough, on to the review.

One problem I always see when trying to design for multi-platforms, at least when those platforms have HUGE hardware differences, is trying to keep the visuals looking good across each. Something that did not seem to be taken into account for Iron Man 2. Iron Man 2 was developed for pretty much every console and hand held device. But when it comes to the major consoles it looks like they did the best they could with the Wii's hardware and called it good for the PS3, XBox and PC.

While I am sure these are some of the best graphics the Wii has seen in a while, for the others I have to ask WTF Sega? Could you not change out textures and models for the systems that could handle more polygons and higher quality textures? It just does not do anything on the "next gen" systems at all. I'm sorry, but there is a lot of room for improvement here.

Main graphics aside, the rest of the game looked amazing. Meaning the HUD and menus were really sweet and pretty to look at. But you had to have the intelligence of Tony Stark to actually make heads and tails of things at first. I will admit I got lost and ignored some things due to lack of having a comprehensive setup but being graphically pretty. You do need to sit and take a lot of time to get use to things to understand the pretty.

Metal crunching. Check. Bullets firing. Check. Explosions. Check. All the other myriad of background noises. Check. All done really well and in an immersive way. Also Check. If you don't get it yet, for the most part the sounds and music of the game where just as awesome as they were in the films. But how was that not to be expected?

What does make it a "for the most part" though is the actual voice acting. Not that it was crappy or anything. Just that for a game that is supposed to be based off the film you would expect more of the voices to sound like the film actors. Even Sam Jackson and Don Cheadle didn't sound right in their voice overs. Almost like there was a filter applied to their recordings and no one in QA caught it. At most times, none of the voices sound anything like the actors they are based on or even from. If you are going tout a couple big names, at least make it sound like them.

Okay, one of the things that was done right here has been the upgraded flight system. It is huge step over the first Iron Man's flight controls. But it seems that this is where a good chunk of their production took place. Swapping between ground and flight are just as seamless as you would want in an Iron Man game. The only real issue is that you can not fly too low to the ground as you will swap to run mode just as quick.

With the flight control being the big bonus for the game, the rest of the controls just did not keep up with it. Combat being extremely clunky with a target swap that sticks or swaps when ever the game feels you need to. That and requiring the trigger buttons to be pressed exactly right to fire got old real quick. Pretty much tightening up is not really what needs to be done, but a full on redesign, with tightening on the low flying.

For the most part there are two gameplay styles, each with the same functions mixed in. Read that as you have Iron Man and you have War Machine. Each have the same style moves and game play. But depending on who you choose is where the game play changes. Let me split them here.

First, I started with War Machine, being my preferred of the two. I found that the game was extremely hard and I got beaten down a lot. I mean a lot. I had to fully strategize what I was going to do and get precise timing mixed with luck. After playing a section multiple times I finally made it though and felt accomplished. I also dreaded playing through with Iron Man afterward as I figured War Machine would be the most powerful when it came to brute forcing a level.

Now with Iron Man, I tried the same thing as mention above. Only I had no issue slamming through the level. I figured it was because of knowing the level. Then when I tried the next mission, I once again started with War Machine planning on doing the same thing. After dying a bunch I decided to just give Iron Man a try instead of planning and beating. You know what happened, I flew through the level not dying once. Almost as if Iron Man has invincibility on the entire time. How is this a balanced game if a similarly advanced character has a lower chance at completing a mission while the titular character walks through as if the enemies were shooting peas. Completely unbalanced.

When all is said and done, this is a movie adaptation game. While it has nothing to do with the main story of the films, it is the same quality of game you would expect of a made-for-film game. I am sure that if they were not trying to push the game for launch with the film and had another nine months of work, it could have been a really good super hero game, but alas that was not the case.

If you really want to see what I am talking about for Iron Man 2, rent it. That goes for you who want the trophies/achievements that come with the game. Paying full retail price is going to leave you with the sour taste of battery acid in your mouth.

Iron Man 2 was developed by and published by Sega for the PS3, XBox 360, PC, Wii, DS, PSP and iPhone on May 4th. A copy of the game was provided by the publisher for review purposes. I played with both Iron Man and War Machine on multiple different levels, both on the hardest game setting.