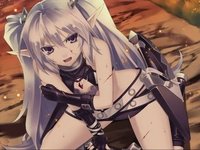 As a gamer that is very keen on the import scene, I had heard of Record of Agarest War when it was first released in Japan in late 2007. I was intrigued by the reported dating aspects, the Soul Breeding the game touted and being able to play through story through multiple generations. Not surprisingly, I never thought this very Japanese-style game would see a release in the U.S. Last year I purchased the European release for the PS3 and before being able to play the game for any serious amount of time, I sold it at the announcement of the U.S. release. This release would even be available on the XBox 360 and come with bonus items, such as a pillow case, soundtrack and a mouse pad featuring one of the characters with her breasts being there for wrist support. Hell, I even purchased the Agarest War canvas at auction from Aksys Games at PAX East.

Fast forward to release day, April 27, 2010. The game arrives promptly at my doorstep the very next day. With much anticipation I opened the Naughty Edition XBox 360 version. Placing the mouse pad at my PC, I left the pillow case and soundtrack in the box in order to immediately put the game in my XBox 360. As I always do, I ripped the game to my hard drive to quiet the machine and cut down loading times. I started up the game and quickly began the story.

Record of Agarest War is about a young general named Leonhardt who turns against his own nation to save a young girl named Elaine. You quickly realize a dark force is helping your nation attempt to conquer the nations surrounding them. You begin your quest to try and stop these attempts at domination and at the same time, put an end to the evil forces at hand.

Now, I am not a Strategy RPG fan by any means, but I quickly felt comfortable with the battle system in Agarest War. It has some very staple Strategy RPG designs with Attack Points, a grid battlefield and movement handling. What helps it stand out is an interesting "Link" system that helps connect your characters depending on their placement on screen. This allows you to do multiple attacks with different characters in one turn, including combo attacks if they are available. How quickly you defeat your enemy also determines the stat and EXP bonuses you receive at the end of the battle.

The graphics are not exactly what one may expect from current generation systems - it features 2D sprites while in battle and still drawings while in conversation. The drawings of the characters are well-detailed and look very crisp in HD, but sadly have no animation to them. Thankfully, this does not detract from the overall experience of the game. The game features the original Japanese voices with English subtitles, which was an excellent decision in my opinion. The voices of the characters fit each person's personality perfectly. The game's soundtrack is typical of many Japanese RPGs, yet very well composed. The soundtrack can stand alone apart from the game and if you are buying the initial release, you are treated to a Soundtrack CD.

Unfortunately, I can not speak on too much more about this game, as I was only about 15 hours into generation one and managed to royally screw my game progress. During some events, you can't leave, and if you save during them, you are now stuck in that event until you finish it. You also can't heal between battles, so if someone dies, they can be lost for the rest of that event if not resurrected in time.

Well, as I was playing through the game on easy, I was pretty much blowing through every fight and Boss Battle up until this point, I figured there would be no trouble in saving right before the current fight I was taking a part in. Alas I was wrong. I found myself under-leveled and getting my ass handed to me on a platter. I attempted the battle a couple more times before rage quitting for the night. Two days later I tried again, now pushing my attempts into the double digits with no success. I would sometimes get close, but could never finish the battle out. Again, another night and more attempts with no luck.

Like I said, I'm not a huge fan of Strategy RPGs, so I am not used to how grinding and leveling work. I also wasn't expecting a boss fight to become a lot tougher than the normal battles I had been taking part in. I expect an increase in difficulty for a boss battle, but not what I experienced. After much frustration and a few more hours after my initial mistake in saving the game, I can no longer proceed. My will is broken and my desire to play through this game has been lost. Maybe one day I will be able to come back to the game and finish it, but as of now there is no way for me to continue.

I hope people take heed in this article and don't see this as me knocking the game. This comes from my own inexperience in Turn Based Strategy titles and my own mistake of not creating a separate save file as a back up in case something goes wrong. I lost nearly 20 hours thanks to that mistake and completely shattered my own experience. I do think fans of the genre will love the game and have a blast with the story and characters it presents. Alas I will not be one of them currently enjoying the game. I hope one day I will find the time to come back and play through Record of Agarest War again.

Michael purchased this game himself for the XBox 360 and received no considerations from Aksys Games.