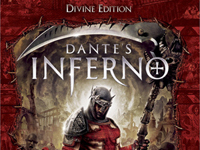 Is it worth the $10? Will it keep people playing Dante's Inferno until the inevitable sequel? Let me tell you my thoughts.

My first thought was excitement to give Trials of Lucida a good go. I was curious as to how the co-op/multiplayer would work for Dante's Inferno. Something that I found to be a let down shortly after I loaded the new content. Once entering the main screen listing all of the trials, I was quickly bombarded with a list of Trophy/Achievement Whore levels made simply to gather the new trophies/achievements that came with the DLC. None of it was challenging - mainly 15-second levels to quickly collect medals and meet the requirements. I was severely disappointed, especially to see that most of them were ranked at 4 or 5 stars for level design.

Now don't get me wrong, there are some serious levels made by fans of the game in the mix, but they mostly have been marked with a low star rating. Some were rated low without warrant, some with good reason. The impression I have is that it was the fact that since they did not help with the Whoring, they received poor voting. That lead me to moving on to play the EA created levels. Hoping that these would be something more, at least after I saw this was an option.

I will admit that it is partially from my lack of dissecting the menu system and partially from it not be prominent, but I almost missed the fact that EA had made challenges in the first place. It should really be the first thing we see, but whatever. There are actually decent maps out there from EA to make up for the Whore maps from the community.

Now outside of the challenge playing, which was fun for a bit, is the challenge building. Something that when you actually take time to do, can be more fun then playing them. Yes, I actually took more enjoyment in building a challenge using the limited toolbox. There are just so many options to choose from and you are able to tweak damn near every stat. The only thing I found lacking about it is that there were predetermined places everything had to go on the map. Which means no crazy hidden traps or placing spawn points in weird spots to trip up players. You can pretty much know where everything is going to be, just not what enemies or traps until you start up the level.

One feature I liked with these maps is that you can see if anyone has successfully beaten your map or not and change it based on how long it is up without a person being able to beat it. I, for one, have two maps still up that have yet to be beaten as of this article. To me, that means either the combo required to beat the wave is too great or there are very few people out there playing real maps and not just the trophy/achievement maps.

In the end, this DLC is a nice concept, and it could have worked well if it was used properly by the community. I will most likely poke my head in every now and then to see what EA has to offer for maps, but that will be about it. The community seems to truly only care about their trophy level and gamer score, making this DLC not completely worth the $10. If it wasn't for that, I can see people finding great appeal in the tools that have been produced. Even mini-tournaments to make the best challenge, but I don't see that happening unless EA cleans up the community.

As of now, I'd wait until the price drops for the DLC. By then hopefully it will be $5 and EA will have a few safeguards in place for the community. Like maybe clearing out the 75+ "Get A Platinum Medal In 15 Seconds" maps. There is no need, humans. If you truly want to whore, leave just one up there and call it a day.

Dante's Inferno: Trials Of Lucida was developed and published by Visceral Games and EA for the XBox 360 and PlayStation 3 on April 29th. Requires a copy of Dante's Inferno. A code for the DLC was provided by the publisher for review purposes. I spent about three hours trying levels and building my own.