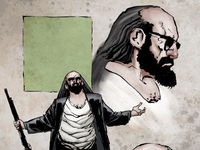 In either instance, it sounds like it will play out much like the first iteration of this mode from Kane and Lynch: Dead Men. Team with the most money wins and gets to split it evenly. What is interesting though, is I get the impression that during this go 'round, players who are back stabbed automatically hop to the AI cop side of things and get to hunt down those that turned on them in the first place. Nice little twist as I am sure that player will know how best to hunt your ass down after playing on your side and seeing your tactics first hand.

One last thing before I let you off to wait for Kane and Lynch 2, is that it was just announced this morning (5/13/10) that DC comics is working on a comic book that will describe the criminal pasts of the two guys. Nothing more on what it is all going to cover, but we'll find out this August. Here are some of the concepts for Kane and Lynch from the hand of Chris Mitten.