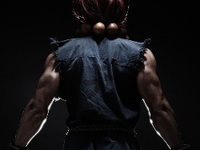 Joey Ansah is a stuntman (last see in Bourne Ultimatum) with a passion, a passion for the Street Fighter franchise. Ansah has personally expressed what so many fans of the game have felt every time a mention of a new Street Fighter movie was announced:

"As an actor, film maker and a fan, I have been repeatedly disappointed by the many diluted, un faithful and outright butchered movie adaptations of fighting video games. It was clear to me, that given the way the movie industry worked, we would never see a super faithful, darker toned and more adult themed (or just plain good!) incarnation of Street fighter unless a die-hard fan director or film-making team with the game canon knowledge, film making know how and connections stepped up to the plate to helm such a project."

I think this sums up about every persons feelings that have ever watched or witnessed the dismal movies ever to be graced with the name Street Fighter. Ansah has found salvation, and brings us an awesome team for this online short film which is scheduled to be released this Thursday. With big names like Owen Trevor from Top Gear and Anthony Waye (Producer of the current James Bond films) and an actual blessing from Capcom, we can only sit and wait to see what could possibly be the best adaptation of the franchise in years. I mean look at their eyebrows, 'nuff said.

To give you a brief but exciting taste into this short film, Ansah has released two trailers for your viewing pleasure.

If these don't get you excited, I'm not sure anything will. Keep an eye out on Ansah's official website for the short film this Thursday!

And now, the full film: