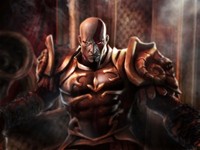 God of War: Chains of Olympus is still the highest rated PSP title of all-time according to Metacritic.com. So what is in store for us this time around.

It will be developed by Ready At Dawn Studios which is also the same team that made God of War: Chains of Olympus and also worked closely with SCEA's Santa Monica Studio, so you can expect this team to know what they are doing. Also the team is pushing the limits of what the PSP can do with state-of-the-art visual technologies, higher resolution environments, and greater depths of scale. They are also providing 25% more gameplay, improved weapon system and new magical powers.

The storyline will serve as a prequel, picking up where God of War left off. As Kratos continues his journey to rid the nightmares that haunt him, he will face his dark past to prove his worthiness to the Gods. In this journey questions will be answered like Kratos' tattoo, scar and family.

I am interested to see how far they pushed the PSP to make it more stunning this time around. I am looking forward to see more about this game at E3 2010. Plus this game should give you a reason to dust off your PSP.