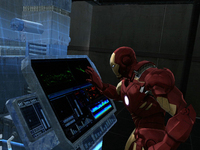 Visually it is looking rather decent. As you can see from the below screen shots and new "prologue" trailer for the game. I mean they are not the best visuals known to the gaming industry, but for a movie tie in game you have to admit to yourself that they are pretty spectacular. Even though they do take on the cartoon feel to the whole style, but that is ok. I mean they were not going for true to film looks and such.

What does make me sad though is that the voice work is kind of a let down. At least in the form of Iron Man. Maybe it is just me, but it sounds like the voice actor they got is trying to sound like Robert Downey over his previous work on the Iron Man cartoon. It just doesn't sit right with me for some reason. It could just be that it is on my small computer screen and speakers too. Give it a watch and let me know if I am just insane.

Hades [ Tuesday, 27th of April 2010 - 09:33 PM ]
On IMDB.com he is credited, but I think I would take the words of the game's producer over IMDB. I mean it came right from the Dean Martinetti's mouth. I do agree though that even Nick Fury doesn't even sound like Jackson at all.

Hades [ Tuesday, 27th of April 2010 - 08:55 PM ]
According to the developers and Sega, the only actors from the film that were able to add VO work were Don Cheadle and Samuel L. Jackson. The rest of the cast were not able to clear schedules to add to it. Here is the interview where that was stated: http://aggrogamer.com/article/1846/Iron-Man-2-Beneath-The-Armor