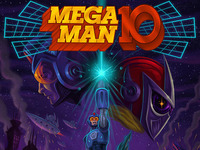 While there isn't a whole lot Capcom and Inti Creates actually changed in the bigger scheme of things, Mega Man 10 features a lot of new tweaks and balance adjustments that make it far less threatening than its predecessor and more entertaining in the long run. While there are some tough areas in the game, overall I wouldn't call it difficult at all, and perhaps it is one of the most fair games in the series. The newly added easy mode certainly helps: weaker enemies and bosses, easier ways to get screws, and most importantly, some support against those nasty insta-kill spikes and holes that the Mega Man games are notorious for in the way of floating platforms.

Mega Man 10 of course features eight robot masters you have to kill in order to gain their powers, and this time you can tell the designers are hard up for creating some interesting bosses to fight. While the roster certainly doesn't compare to the dreadful lineup of Mega Man 7, Sheep Man, whose power is to shoot clouds that burst lightning, is one of the oddest in the main series for sure. Each weapon feels like it is pretty unique, and pretty much none of them are over-powered in the way that some of the weapons were in Mega Man 9, such as the Jewel Shield.

By default you have access to Mega Man and Proto Man, but for 160 MS Pts/200 Wii Pts/$2 you can also download an unlock key for Bass, who had yet to appear as a main playable character in a numbered title in the series. Compared to Mega Man, Proto Man has the slide and charge that everyone knows and loves from the later games, but also takes more damage and has quite a large knockback when being hit.

Bass is even more different, however, as he shoots rapid fire in multiple directions (only when standing or jumping) and can dash similar to Proto Man’s slide. Perhaps the biggest change in using Bass, though, is the fact that you have access to his robodog companion, Treble, who can transform Bass’ suit with the ability to fly with a jet pack. This makes even the hardest of platforming areas a piece of cake, and while it’s a shame Capcom had to yet again charge money for a new character, at least this time there’s more variety.

If someone were to ask me which game to get between Mega Man 9 and Mega Man 10, I would without a doubt go with the latter. While Mega Man 9 definitely had a huge impact, there is something very off-putting about the way it plays. Many of the levels are designed in a way that you will have to continually replay them until you memorize where the hazards are, but being hard for the sake of being hard doesn't make it better, and in a lot of ways it detracts from the fun that the Mega Man games are known for.