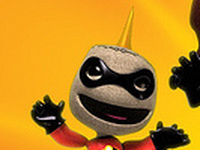 Along with the skins, a level pack styled after Pixar's first family, which will include:

If they could get Samuel L. Jackson to record just a few lines of dialog, then I think it will be a no-brainer. Either that or grant some of the powers that the characters had in the movie. Chances are though, given how much fun I always have with these new items, I'll be picking this up come April 8th. There's no word yet on the pricing, but given the history of some of these packs, it won't brutalize your wallet.