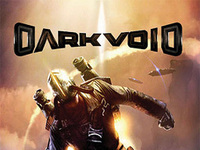 The sci-fi action-adventure Dark Void demo has dropped today for the Xbox 360 and will be following on the PSN tomorrow. With the demo you get the chance to take that jetpack for a spin, and engage in some aerial and on-foot combat. It is supposed to serve to wet the appetite for the games' January 19th release date. With some unique gameplay elements like vertical cover, I've been looking forward to taking this title for a test drive. The press release speaks with some glowing words of course, "With the launch of Capcom’s sci-fi shooter, Dark Void, right around the corner, Capcom is giving gamers a chance to test drive the void for themselves this week with a downloadable demo coming to Xbox LIVE and PlayStation Network. The demo will give gamers a chance to strap on their jet pack for the first time and explore the mysterious and miraculous world of Dark Void through a combination of thrilling aerial dog-fighting, unique vertical cover action and on-foot combat. The teaser level will be a nice introduction to gamers who plan to try out the full game when it ships on January 19, 2009."

So enough rhetoric, how is the demo?

Well, initially, after selecting the normal difficulty I was struck from the visuals for the game. While they may not completely blow your mind, they are very crisp and the models look great. I'm definitely digging the art style as well. You don't get much in the way of backstory, and are thrust right into the gameplay. After making your way through a cave and speaking to a barely clothed ally, you see an enemy outpost and you are instructed to basically go forth and fly.

Control wise, the flying feels smooth and straightforward. If you've ever played any flight simulator, than you can pretty much expect the same here. You'll have a basic boost and brake, and your weapons will consist of the primary and secondary fire that you also wield with the jetpack (though only the primary is present in the demo). Additionally, you can initiate special moves with the right stick. The aerial combat is pretty exciting and the dogfighting felt especially more intense given the fact that it's just you with a jetpack as opposed to being encased in a fighter jet.

After the initial aerial fight you then land, again very easily and intuitively, on the ground to hop right into ground combat. The transition is seamless and is definitely commendable. It really gives the feeling that you can handle potential objectives in different ways. Ground combat is typical third person gameplay, with one hit melee kills that can come in handy as well as the option of picking up some of the great weapons the "Watchers", your main enemies, wield.

The enemies never really felt like a threat however, and I can only imagine this late in the development if the AI will ramp up a bit before the game's release. If not, I can see blowing through this game fairly easily. Then again, it is still a demo. And though you don't get a chance to fight the impressive boss that makes its way out, it serves as great teaser fodder.

Lastly, I was extremely impressed with the music. After watching several behind the scenes videos concerning it's creation, I was pleasantly surprised to hear it during gameplay. It really adds a cinematic flair and I'm eager to hear what else it has to offer.

The film as already been given the Hollywood treatment and will be headed by Brad Pitt. So, let's all be glad we got the game first before the movie came out, shall we?

Look for a full review from Aggrogamer when the game is released.
3 comments

SnappyDude [ Friday, 8th of January 2010 - 10:26 AM ]
damn oh well, Multiplayer on this could of been super fun. ALso the demo wasnt to bad, I mean it didnt impress me enough to buy it but it did kinda make me want to give the full thing a shot so i might rent it.

WarKOAN [ Friday, 8th of January 2010 - 04:08 AM ]
From what I understand, it is a single player adventure. Though having a multiplayer element for a game like this would be a lot of fun.

SnappyDude [ Thursday, 7th of January 2010 - 03:50 PM ]
Capcom normal does a fairly good job, im grabing the demo now. Does the full game have multiplayer??
Go ahead and login or register