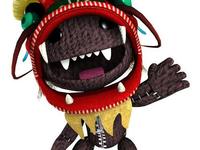 “Play”: Little Big Planet PSP is in no way a port from the PS3 to the PSP. This is a new game with 30 new levels starting you from “Down Under” and ending at “Tinsel Town.” Seven new “worlds” to explore as oppose to the eight that you get to play in the PS3 version. Overall, Little Big Planet feels virtually the same as the PS3 version and though Sony Cambridge couldn’t really bring the complicated physics model over to the PSP, the attempt to replicate it did pass with flying colors. The slightly floaty jumping and the dodgy three-plane movement also make a return to this version of LBP.

Just like the PS3 version, Cambridge keeps the “cardboard puppet show” look and the spirit of Little Big Planet throughout the whole game. One thing you will notice is that almost none of the lighting effects from the PS3 version made the jump to the handheld, especially the dark ’n’ gloomy. Nearly every level is bright and starkly lit, which includes the icy cavern. The levels have been shortened to fit into what most handheld games are trying to accomplish with short bursts of gameplay.  For me, the shortened levels helped keep away the fatigue I felt in the later levels of the PS3 version. They also removed the limited lives from checkpoints; dying simply takes away from your overall level score.

“Create”: The game's hub gives you the ability to choose which aspect of the game you play.  In “My Moon” you are able to let your creative side take over as you use the many tools that Little Big Planet famously provides. The exception to the toolset is for the camera support, but that is only a minor setback. Just like the PS3 version, you navigated through the gauntlet of narrated tutorials, taking baby steps as you’re making your level. Similar to its PS3 brethren, this process continues to be lengthy unless you are a level making pro, then you should be fine.

“Share”:  The “Community Moon” allows you to share your level or to download other player-created levels. You can see who created them and are able to rate the level and leave comments about it. At first you will be curious as to why are so very few levels created (or at least I thought so at first), but you will need to use the left and right trigger button to switch pages to see more other levels that players have created. You can also publish the level you worked so hard on and share it with the masses.

My Take: If you loved Little Big Planet and be honest here, you do, then this is a MUST get for either your PSP 3000 and under or the PSP Go. The game is fun as hell just like the PS3 version, and even though there isn’t really a multi-player mode per se, the amount of levels alone will keep you busy for days and then some.