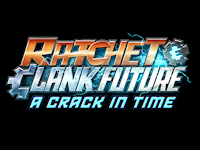 Before we get in to deep, let's get a quick glance back at the Future trilogy thus far. In Tools of Destruction, an evil tyrant named Tachyon set out to revenge against the Lombax's for destroying his race. This is the first hint we get that Ratchet isn't the last Lombax in the galaxy. Ratchet and Clank defeat Tachyon but then Clank gets taken away by the Zoni, who had previously "helped" him throughout the game. Tools of Destruction ends with the kidnapping of Clank. And thus begins the shortest DLC only (in America) title in the Future series: Quest for Booty. In this episode, Ratchet is still looking for Clank and his goal is to find his location. After much tomfoolery, Ratchet learns the location, and sets off to go find him. And thus begins A Crack in Time (ACIT).

Ratchet and Clank is a tried and true formula of one part adventure, one part action, and one part platformer. What's great about ACIT is that it continues this formula that's worked in the past, yet continues to add in enough new material to keep longtime fans satisfied. One of the greatest new features is the ability to fly around in space and do side missions and explore other planets when not busy doing the main story missions. There are a whole mess of planets to explore, each with different stuff to do on them. Most of the time the prize for exploring them is a Zoni (yes those Zoni) who can upgrade Ratchet's ship Aphelion.

The planets, while numerous, aren't as big as say, Mass Effect's, think smaller, like Super Mario Galaxy. Some even have side missions that can be done if you want to take a break from the main storyline. The main storyline (as with all Insomniac games) is very well told and has enough twists and turns to keep the player on their toes and engaged in the storyline, but not enough twists and turns to confuse the player. During the game, Ratchet meets a new character, General Alister Azimuth, who is a Lombax living in exile as a rebel. Azimuth's character arc is one of the most interesting I've seen in any video game let alone movie, there's an air of mystery that surrounds him from the very beginning and the game really fleshes out his character over the course of the story.

The story will take Ratchet to several different planets, each with its own look and feel. It also involves Clank! Unlike Quest for Booty which solely focused on Ratchet, ACIT features several levels where the player controls Clank, who has been taken to the Great Clock to be its caretaker. Along the way he'll solve different puzzles, many using "recorded clones". It's a really interesting puzzle and the player uses these pads that clone Clank and then playback every action he completes during a recording. While many of these puzzles are fun, some can get very frustrating. Luckily for speed runners or younger gamers or gamers who just don't feel like doing puzzles, can skip these puzzles. Another job of a caretaker is to fix time rifts on various planets. It's a fun minigame that reminds me of Everyday Shooter for some reason (it reminds me of it, but in no way is it like Everyday Shooter). Clanks also given a couple different weapons, the most interesting of which is the time grenade. No, it's not a grenade that explodes after a certain period of time (it explodes on impact) but it slows down time in an affected area around the grenade. It's useful to slow things down during puzzles or defeating quick moving enemies and can be used anytime.

Clank's not the only one with new equipment though, Ratchet has new weapons as well as some new hoverboots. The hoverboots, allow Ratchet to do just that, hover. They allow him to go much faster than running, and allow him to make large jumps by softening the landing. My favorite of the new weapons is the Buzz Blades weapon, a weapon that shoots, you guessed it, saw blades that devastate your enemies.

The graphics are what you'd expect from a Insomniac game: great. While some items get a little repetitive (how many of these pipes are leaking in the exact same spot with the exact same leak?) but the variety of different graphics on each planet really stands out. From lush forests to dry deserts to sky high urban areas, each texture is crisp, each rough edge is polished, and everything looks amazing. The sound is very good too, with the out-of-this-world weaponry getting out-of-this-world sounds. The voice acting is great and every character has a a voice that is filled with emotion.

All in all, ACIT is a great game, fans new to the series would be better served off playing the first two games in the Future series (as well as Up Your Arsenal if you want to get the full story of the game), but don't let that deter you from picking up this game. While I wish that the game was a little longer in the main story mode, I can't complain because of the amount of side missions available.

Ratchet and Clank Future: A Crack in Time is available now for the PS3. I bought mine in the store for $59.99 but you can find them cheaper on the interwebs!

SnappyDude [ Friday, 6th of November 2009 - 06:40 PM ]
Can I comment today, lame spammers. anyway thanks for the good word on the new game. This series alone is reason enough for me to get a PS3 at some point its in my top 5 favorites of all time the 1st and 3rd being the best if you ask me. But thanks for the review (even if reading it made me remember I sold my PS2 and now I have no way to get my R&C fix)
Go ahead and login or register