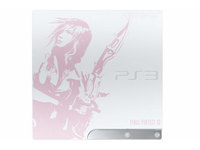 The themed PS3, seen below, is a bit "girlie" if I do say so. Granted it does have the main female lead on the case itself, but White and Pink? Why were these colors selected? I have no clue and probably never will as those minds at Square-Enix are crafty and shifty. But it looks very feminine in the end. At least by social conditioning standards. But we all know it will sell out in minutes and then have it's own eBay section for the true die hard fans of the franchise. On to something that is better suited for both genders of gamers, the awesome trailer for Final Fantasy XIV. With a great mixture of gameplay and those over the top CGI clips that Square-Enix is well known for. Including a fully rendered version of a franchise staple monster that will have you replaying just to see it over and over again. A Marlboro in full rendered CGI! That's right. It is spectacular.

CGI Marlboro aside, the game looks like it has shaped into the perfect FFXI upgrade, even though it isn't slated that way. It just looks like FFXIV does to FFXI what Champions Online did to City of Heroes/Villains. The gameplay looks a little more solid and the game world and effects updated too. But why listen to me prattle on when you can take a look for yourself.