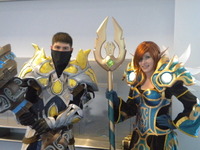 After entering the convention center for day two of Blizzcon, I made off right to the Starcraft II line so I could play a bit of the single player mode again. Starcraft II plays so well. Much like it did with the original Starcraft and Starcraft: Brood War, it seems like it never skipped a beat. I was afraid that they were going to change a lot of the mechanics in the game. Change it to a point where it would be a unbearable to play or to have it feel like a completely different game. There was one thing that was different in the game: the hub. You know, the system that they have in the game where you choose which mission you want to play, upgrade weapons, armor, and skills.  While this hub area is not new to the genre, it is new to the franchise and looks to be a welcomed improvement.

Now the mission that I picked was the same one I picked on Day 1, which was a escort mission. From the start of the mission, the NPC drops down 3 Firebats and a Medic to get to the starting zone. Along the way you run into some Zerglings. Your Firebats can handle these with ease with the help of the Medic. After clearing a path to the NPC Terran base, you take control and your mission objective is to escort 50 civilians to the transport without the Zerg killing them all.

After finishing up with Starcraft II, it was time to head over to the World of Warcraft: Cataclysm line and try out the two new races: the Goblins and the Worgen. The first round I went with the Goblins, as they are now part of the Horde and that is where my loyalties lie. You start the leveling process on a plank where you are laying lifelessly. Lifeless until one of your fellow goblins comes and use jumper cables to revive you. After that the leveling begins as you learn some of the special racial stats for the Goblins. Racial stats such as the “Rocket Jump,” which hurls you 20 yards anywhere. The “Rocket Barrage” can be used on nearby enemies with rockets. Your attacks and casting speed time is increased by 1% with the “Time is Money” ability. The best ability so far is the “Best Deals Anywhere” in which you are giving significant gold discount when buying from any faction, regardless of reputation. Are you in a raid and need to get to the bank but your cool down for your hearthstone is down and the mages refuse to use a portal for you? Well wait no more as the Goblin has the “Pack Hobgoblin” which allows remote bank access every 30 minutes. The Goblins can be any class except for Paladins and Druids.

From there, it's time for the Alliance to get a turn as I stepped back in line to play the Worgens. After getting back to my seat to play this highly cool-looking race, I became disappointed real fast. Once you created your character and log in you find yourself on trial for something. Maybe for being a Worgen, but I thought everyone there was a Worgen. So you must've done something really bad to be locked up from the start. Once you are released from your jail, that is when your leveling process begins. Just like any other race out there, the Worgens also have racial abilities which makes the race different than any other. Like “Aberration,” which reduces the duration of curses and diseases by 15. Worgens also have an ability called “Flayer,” which increases skinning by 15 and allows the Worgen to skin faster without a skinning knife. Need a speed boost? With a instance cast called “Dark Flight” you get a 70% boost in movement for 10 seconds and a 3 minute cooldown. You also can dish out more damage with “Viciousness” which increase all damage by 1%. Worgens can be any class except for Paladins and Shamans.

After going through both the Goblin and the Worgen, it was time for me to head to the Diablo 3 line, but not until after I had some food in my belly. While waiting in line, another question formed in my head. How much did they change in Diablo 3 from Diablo 2? Well after sitting down and playing the new Hero Class: The Monk, I can safely say the class was really fun to play. This is especially true since the class is really dependent upon on how fast you can click the mouse buttons. You have some serious firepower with abilities like “Crippling Wave,” which de-buffs attacks and allows you to decrease the speed of your target on the first blow for a limited time. It also reduces the damage your enemies dish out for a limited time on the second strike. It refreshes these strikes and extends the effects on the third and final strike. The “Seven Sided Strike” is one hell of a attack. It allows the Monk to teleport between enemies and land up to nine strikes when it is fully upgraded. Lastly, what kind of monk would this character would be if he didn't have an ability called “Exploding Palm?” It is a power that allows players to inflict significant damage on the first and second strikes. On the third strike, the Monk imparts a bleeding state on the target, causing it to lose health over time. The Tab key will be your best friend with the Monk as the attacks are assigned to your right, left mouse button and the Tab key. Meaning you can start a combo with 1 ability using the right mouse button, then the left, then you hit the Tab key to switch abilities and finish off the enemy with the last ability.

After all the waiting in line and the amount of gameplay I was able to see, I think it is safe to say for the remainder of the time at Blizzcon 2009 I was enjoying what was left of it. I watched the Live World of Warcraft Raid and participated in some of the booth contests, like the SteelSeries chest opening contest. The makers of the World of Warcraft steins were there to sell their wares and if you played their 'beer pong' contest you were able to get a percentage off the price of the stein. Adding to the awesomeness included getting autographs from everyone from 'The Guild' and bumping into Robert Welkner from Coin-Op TV, Beau Ryan and Leo Camacho from RadNerd.com and of course the Ozzy Osbourne concert at the end of the day.

Even after two days in the Anaheim Convention Center, having to wade through people like a running back, I thought it was an entertaining convention. This was mostly due to the announcement of a new hero class for Diablo... and the new expansion pack for World of Warcraft... and the thousands of people there to chat with. It was great to see the different kinds of people from the geeks, nerds, and dorks to the semi-looking jocks to the cosplayers to those from out of the country to full families attending. One of the things I realized while attending Blizzcon was about the passion, dedication and money people willing go through just to spend two days in Anaheim just for Blizzard games. Granted, Blizzard's major titles are Starcraft, Diablo and Warcraft, but just seeing how excited people were about these titles was truly uncanny. I guess for me I left Blizzcon 2009 a bit disappointed with no announcement of a brand new Intellectual Property. No I don't count a WoW expansion as a new IP. I truly feel that in order for Blizzard to bring in new fans to the Blizzard bandwagon that they need to release something new and fresh. Hopefully we will get one in the future. It has been one hell of a experience and I look forward to attending Blizzcon again maybe next year. Till then FOR THE HORDE!