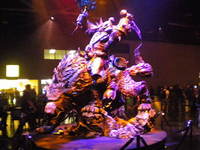 Friday morning, as I arrived to the convention center the first thing you would see are the nerds, geeks, and dorks waiting in line. Some of which stayed overnight to be one of the first few to get into the center. As I walked towards the end of the line, I was astounded by its length. After two hours of standing, the wait was over and the chaos began as I made my way to the Blizzard store. Realizing the line wasn't moving after standing there for 10 minutes, I decided to go ahead and take a seat for the opening ceremony being held in Hall A, the main hall for panels, as it fills up pretty quickly.

Mike Morhaime, President/CEO/Co-Founder of Blizzard welcomes the attendees with, "Hello everyone, Ladies and Gentlemen, Terran, Protoss, and Zerg, Members of the Horde (FOR THE HORDE!) and Alliance, welcome to Blizzcon 2009! I would also like to say a quick hello to the viewers watching us from Germany at GamesCom as Starcraft II has just won Best of GamesCom." It was a great way to jump start the convention. Mike then mentioned how fast the tickets for the show went, saying "If you didn't get into the queue within 30 seconds you didn't get a ticket. It took 45 minutes for us to process all the orders, but essentially 20,000 tickets to Blizzcon sold out in less than a minute. That's even faster than Ret Paladins can storm the forums after a nerf!" After that, I was gone as I was really laughing my butt off. Yeah you're probably right in thinking that you need to be part of the community to fully understand the jokes that Mike was telling. Mike continues with more than 50,000 strong watching Blizzcon via DirecTV Pay-Per-View.

Up next was a video of what has occurred within the past year from Blizzcon 2008 to the worldwide release of World of Warcraft: Wrath of the Lich King. After the video Mike went on to talk about what changes were made after the release of Wrath of the Lich King. He then went on to mention the new upcoming service where players are now able to change factions on their server. This November will be World of Warcraft's 5 year anniversary and with that Blizzard is revamping Onyxia, one of the classic raid bosses.

Next in the ceremony was Chris Metzen Senior V.P of Creative Development who came out by saying what an honor it is to be at Blizzcon. He then reminded everyone how Blizzard won't release a game until they are ready. Before Chris got into the news, he asked 3 questions: "Where's the Alliances at?" That's when I boo'ed. Then he asked, "Where's the Horde?" I yelled out, "DEATH TO THE ALLIANCES! FOR THE HORDE!" Yes I know I am a fanboy, but so what. After the place calmed down a bit, he then asked, "Where are Diablo players in the house?" Again I cheered. Chris then told the Warcraft players to chill for a bit. As he is pumping everyone up with how far along the game is. He then introduced the new hero class, The Monk, with his open hand and tiger strike fury.

After the video played and the cheers died down, another video was shown of the Monk with in-game action. With Diablo out of the way, Chris mentioned a new expansion for World of Warcraft, called Cataclysm. The video started to play as the world itself is now in chaos and introduced new races for both the Horde and the Alliance. Goblins have joined ranks with the Horde and the Worgen has re-joined the Night Elves to be part of the Alliance. Players around the world are now able to fly in the main lands of Azeroth. New race/class combinations are now available like a troll druid, a human hunter, gnome priest and a tauren paladin. New monsters and dungeons were introduced along with the classic zones of Azeroth, being re-forged by the change of Cataclysm. Level cap will be raised to level 85 with hundreds of new quests. A new secondary skill of Archaeology was added with 2 new heroic classic instances, Deadmines and Shadowfang being created. New battlegrounds will exist with rated team play along with a Guild leveling system and achievements, and a new character progression, Path of the Titans. After the video was done and the cheers slightly went down, 'god' then announced "Welcome to Blizzcon 2009" and off everyone went.

I am pretty sure that everyone assumed that the first thing I would do is head to the Starcraft 2 line to play the demo. Well you're right, but that wasn't until later because the first thing I did was scope out the convention center and figure out the lay of the land. I walked around and checked out some of the other booths like J!nx, Asus, Intel, Epic Weapons, the web series The Guild, Alienware and many others. Throughout the day there were many panels like World of Warcraft Cataclysm, Starcraft II Art, Diablo III Heroes and Monsters, World of Warcraft Art, Starcraft II Battle.net, World of Warcraft Class discussion and the Blizzard Entertainment cinematic. As mentioned before, web series The Guild was in the house and they had their own panel as they discussed the future of the show and answered fan questions. At the end they showed the "Date my Avatar" music video. I then finally made my way to the Starcraft II line and played the single player.

Towards the end of the day it was the annual Costumes, Song and Dance contest hosted by Jay Mohr. For the most part Jay Mohr was pretty funny, but I felt there was a bit too much of the sexual jokes and humor. The Costumes contest started off a bit slow at first, but picked up some energy, calmed down and managed to regain its energy for the finale. Ultimately the winner was Rainyia who dressed as the Mistress of Pain from Diablo 3. The runner up was dressed up as Kel'Thuzad and the 3rd place went as a tier 8.5 Paladin gear. The dance contest was alright, yet funny at the same time. The majority of the dancers were female and pretty much did the same dance, but were all beaten by a guy name James Griffin who did the female Dwarf dance. It was quite the sight to see. Before the dance contest, they had started the sound alike contest and finished it up after the dance contest. That was when I left for the day.

After the wait, the sweat and some of the smell, it was a good first day of me shopping and trying to get most of the stuff I wanted to get before they were sold out. Unfortunately, that did happen to me when they were sold out of the messenger bag (grrrr). Overall it was not too packed, as there were plenty of areas to sit and enjoy some peace and quiet. All I can say about Starcraft II is this, "I want the game RIGHT NOW!"