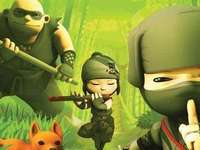 This Thursday a demo for Mini Ninjas will be released for download simultaneously on the PlayStation 3, Xbox 360, and PC. While the PS3 and 360 versions will be available via the PlayStation Store and Xbox Live Marketplace respectively, PC gamers will have to download the demo directly from the games website http://www.minininjas.com/. The PC demo can also be obtained from the Square Enix booth at GamesCom starting Wednesday morning.

Though I’m unsure as to the content in the demo, I can honestly say that this is something I’m looking forward to. I’ve been keeping my eye on Mini Ninjas for several months now and it’s definitely one of the fall titles that are at the top of my list. It looks to me like this is going to be a game that is purely fun and simple. I feel like there’s going to be plenty to do especially with the ability to play as all of the ninja companions Hiro is sure to find along is journey.