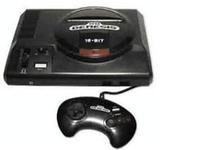 After my parents bought me an Atari 2600 when I was born, the next console I got was the PlayStation 2 I bought myself just after college. You see, my parents wouldn't let us have a gaming console in the house, even if I had saved for it myself. So, I had to find other outlets (read: friends) who had games I could play. Going over to play the NES was not horrible, but nothing could compare to when my buddy got a Sega Genesis. I was still playing my Atari at home so the graphics and sound coming out of Sega’s black box astounded me. Yes, even Altered Beast had its one shining moment.

Countless hours were spent playing games or riding shotgun for some revolutionary (some not) titles. To be able to drop in or drop out of my buddy’s season on NHL ’95 at any time or change the commands of my units in real time playing Herzog Zwei mark some of the best times of my high school years. Sure I played Sonic the Hedgehog and Mortal Kombat (real blood!), but it was crazy off-titles like Herzog Zwei, Aerobiz and Warrior of Rome II that have fueled a love affair with a now-20-year-old system. I owned copies of those last 3 titles years before I owned the console myself, knowing that some day I would want to unearth these titles again (Thank you, Funcoland).

I also played my fair share of bad titles, outside of the aforementioned Altered Beast. Oh how we thought we were bad-ass for playing The Immortal. I don’t know which was worse: how badly it punished you at every turn or the amount of time we thought we were having fun playing it. Then there *random encounter* was *random encounter* the *random encounter* great RPG, Sword *random encounter* of Vermillion. The maze going into the last boss was in a spiral format (Spoilers). So, you could see the lair of your archenemy in the middle of the screen, but you were attacked every two to three steps as the game mocked your progress. The last bad title I submit to you is Mario Lemieux Hockey. That was a game you basically couldn't turn off or the game corrupted your save file, at least for us. We would set up a Stanley Cup Playoffs and I would win my first two games. We’d save, turn the game off and eat dinner. Come back and the series is tied 2-2. After winning another game and coming back the next day, I was down 5 games to 3. Yes, in the best of seven series, I was down 5-3 with games still to play.

As with any system, you take the good with the bad; to me, it does not get any better than Toe Jam&Earl. It’s the valiant attempt of two everyday guys to rebuild their spaceship and return to their home world of Funkotron. What could be more normal than that? It did everything right from its split-screen to full-screen switching to the comic mischief to the genre-busting nature of being an action/adventure/platformer. Playing with a friend epitomized what a co-op experience should be as you worked together to escape those nasty Earthlings.

The Sega Genesis changed my view of gaming and fostered my love for the industry at a time when I was severely restricted in what I could consistently get my hands on. I would like to send out a few honorable mentions to Joe Montana Sports Talk Football, Dr. Robotnik’s Mean Bean Machine and General Chaos along with shout-outs to my cousin David, my neighbor Rob and my best friend in high school Samir. Those three made my Genesis experience possible. Now, 20 years later, the Sega Genesis is not the only retro console I own, but it certainly was my first. Happy birthday my old friend!

SnappyDude [ Friday, 14th of August 2009 - 10:37 PM ]
the genesis was the first system i ever owned, so many good memories this system was the golden years for sonic. Sonic 2 was my first game and still is one of my favorites. Why cannt sega bring back a good side scrolling sonic in modern day, heck imagine a Sonic 2 HD remix how wonderful it could be. Anyway Happy Birthday Genesis!
Go ahead and login or register