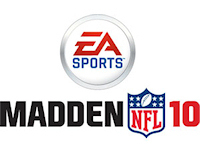 In years past (especially between 02 and 08) the annual Madden has been seen as somewhat of a roster update, however, Madden NFL 10 is something I've not experienced before: an ultra good looking, ultra realistic football game. Madden NFL 09 was a step in the right direction, with better graphics and new animations, however Madden 10 is a giant leap in the right direction, such a big leap it may have just landed where it needed to be.

In years past, Madden has been hampered by a lack-luster graphics system that was essentially a beefed up PS2 engine. Textures were hi-res and the detail was there, however player models and the overall stadium experience was still fairly sixth generation. That all changes with Madden 10. The player models look realistic and no longer have the severe clipping issues that the previous Maddens seemed to suffer from. Madden 10 feels like a real football game, in the sense that no two animations are ever the same, no two tackles are ever the same, no two jukes are ever the same.

The presentation is outstanding again, Madden 10 ditches the always-in-the-way overlay that was in the top middle of the screen in 09, and replaces it with the NCAA Football 10 style overlay at that takes up a small part of the lower part of the screen, which is much better as it allows you to see further down the field without a score overlay blocking your view. The pre-game presentation shows varying footage outside the stadium, with fans milling about, its not entirely essential to the gameplay, but it does add that extra bit of realism thats very nice.

The battle of offense vs defense is flat out awesome. Firecracker players like Adrian Peterson can now break out of 2 tackles only to be taken down by a gang tackle of 7 players, while players like Bob Sanders and Troy Palamalu can take down a less-skilled player very easily. While the goal line defense/offense still seems to be very off (it most of the time favors the offense), the battles between the red zones are more realistic than ever before. Better offensive players can and will beat poor defenders, but the real fun begins when a great offensive player meets a great defensive player, those that have played the demo know what I mean.

While Madden is often the kind of game that people who like football will buy regardless of the new features, I really do believe that this year's iteration will bring in new players who have never played a football game previous. Bottom line: This years Madden is the best looking and best playing and most realistic Madden to date. It is by far the best Madden ever.

As a side note, the cheapest way to get Madden is to sign up for Sports Illustrated, they only charge $49 for the subscription and you get a game that's otherwise $60, so who wouldn't do it? Nobody, that's who.