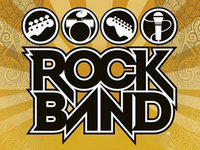 Rock Band is well known for the DLC updates they do every week. Very well known, for it. But one thing that the franchise is not well known for is having a good selection of music that falls in line with the controls and set up. In this case I am talking Country. A genre that isn't normally popular amongst the more hardcore gamers and fans of rhythm games. Well that was up until just recently with the expansion to Rock Band with the Country Pack.

I use the word expansion here because this is really what the whole pack is. While yes you can just pop the disk in and play, if you have the controllers and input devices required, it really shines out, in my opinion, when combined with the larger game. Something I see everyone who picks this up doing. No point in buying all the controllers to play the pack without getting Rock Band or Rock Band 2 as well.

When playing the game as a stand alone title, the menu and options of the game take you all the way back to the early stages of Rock Band. You get some of the options from Rock Band 2, but for the most part it is all similar to the first game. The GUI and menu options let you navigate through to play the 21 songs included on the disk. You are able to create a basic band to play through the songs or just go into the Quick Play option. Both for solo and band options.

Outside of all of that, it plays the exact same as the first game. If I haven't mentioned that. The only gripe I would really have as a standalone game is the fact that the locations and avatars on stage don't always lend themselves to the country genre. There were times where I would have some of the very Metal or Emo characters on stage performing On The Road Again and The Gambler. Not just that, but performing in the rock arenas and metal bars. Just seemed really out of place for all of these songs. But then again, it happens in the larger games too.

For me, this is where the pack totally shines for all of the Country fans out there. Before you ask, included on the game is a download code for the expansion, so you don't have to shell out any extra cash to get all of the songs you get on disk added to your library. Once added to the overall library, the whole pack acts just like you downloaded a greatest hits album from the Music Store option. Even though some of the songs that are available as DLC from the store don't list as being purchased, it is identical.

In the end, this pack is a must have for anyone that is a fan of Country music or who have Rock Band friends that love Country music. This pack adds 21 songs, 13 that can't be downloaded via the store, to your Rock Band library. Which when you look at the price, it is totally cheaper than if you where to download each song individually. This brings the Country selection up to 30 songs for the game. Which is as close as anyone will get right now to having a rhythm game focused around that genre. About 20 shy of what Rock Band had on it's first disk. It also brings you song collectors that much closer to having every song available for the game.