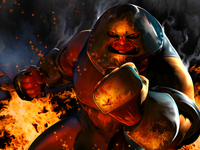 No, the confusion isn't on Activision or Raven's side of things, but more on mine and anyone else that may have sat in on the media briefing for this game. Let me explain.

While being shown the game, we were all informed of one of the new characters to be revealed as a playable character. The Juggernaut. We were also shown how he can use fusion powers with everyone of the announced characters as well. Include a delightful romp while encasing him in a hamster ball of power covered in spikes and let him run around rolling over enemies and object. So it would seem that he was on the general roster, right?

Well now Activision has stated that you only get him when you pre-order the game via GameStop. This also being for the PS3 and 360 versions of the game. So that suggests that what we saw was kind of a ruse. That and that any other platform of this game has absolutely no chance of getting this character of hamster ball doom. Even though the code will be in all versions of the game, as we've seen how he will work with fusions.

So I'm kind of confused. Is this a ploy to get more pre-orders at GameStop or are they really not going to include him in the final build of the game as they have already suggested? Will he be DLC for the GameStop haters who refuse to pay them any money? I'm guessing so, but I wouldn't put it past any of them as of this time.

On a more positive note, you can register on their site now for further exclusive announcements. Not only that, but play and online game entrenched in the Civil War story. All with the chance to be a big winner in their online contest to win big fun Marvel prizes. So they are looking out for us all in the end I guess.

SnappyDude [ Tuesday, 7th of July 2009 - 02:27 AM ]
I really dont like having to pre-order to get juggernaught, but oh well
Go ahead and login or register