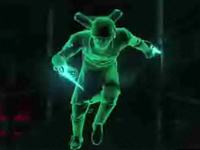 Hospitals for some are just creepy places to be. People laying in "death beds," sharp medical instruments everywhere, creepy doctors or patients wandering about, and the ever draining of ones life force, money. So it makes sense that when you want to place a creepy scene or level in a game, you would choose an environment like this to give that real creep factor to the players. Raven Software, not wanting to skip on this for Wolfenstein, have placed another version of the Hospital level in a game. This time with Nazis and demonic powered soldiers.

Below are two trailers for Wolfenstein that show off this level in the way I'm guessing Raven Software wanted, damn creepy. They also introduce, in death montage fashion, a new-ish enemy for the game, The Veil Assassin. A soldier armed with what looks like two light-concealed-blades and the ability to skip around the level by hopping into the other side. It also looks like this guy does not discriminate when it comes to the killing either. In the trailer you can see him eviscerating both the main character and the enemies on screen. Which could lead to some very interesting scenes in the game.

Here they are in there fun glory.