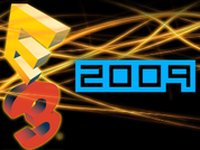 All this aside, Raven Software's Singularity looks like one of the best shooters coming out this year. Players will control Nate Renko, an American Air Force pilot who was sent to an island called Katorga 12 to investigate why the area was emitting irregular amounts of radiation. During his investigation, however, his plane crashes on the island. After he comes to, he realizes that an odd device has been attached to his left arm.

This strange device is called the Time Manipulation Device (TMD) and does just that, manipulates time. As of the E3 demo, it has four main modes, an Age mode, which will rapidly age a person or object, a Revert mode, which will rapidly reverse time of an age or object, a Statis mode, which will freeze an object or human at that moment in time, and an Impulse mode which blasts an object or human away (the impulse mode doesn't really have anything to do with time, but it is pretty cool, and whoever said the TMD was limited to only affecting time?).

After roaming the island for a bit, Renko realizes that the island is constantly switching between 1951, when the island was being used as an experiment lab with element 99 (Einsteinium, a synthetic metallic which has no capabilities to do the crazy stuff it does in the game) by the Soviet Union, and 2010, when the island is largely uninhabited save for a small handful of people and animals. Some of these people are friendly, others are quiet the opposite.

Renko will face not only 1951 Soviet soldiers, but also 2010 Russian Soldiers, as well as some surprise enemies.

But onto the demo!

We start off sometime early in the game, but after the crash has occurred. Renko has already made a contact on the island, and is told that he must meet with a scientist inside a generator building or some sort. Renko fights some 2010 Russian soldiers. He eventually finds himself inside the generator building only to find himself stuck inside what is called the null zone. It is not 2010 or 1951 here, and the events in the null zone are in black and white.

A generator in the far back is exploding, but it keeps doing it, like a tape on reverse. Scientists are seen being killed and blown back by the explosion, it is unknown whether they are stuck in that moment of time or whether they are not in the null zone at all, and is just a ghostly image of something that happened in time past (ala System Shock 2 or Second Sight).

We come across the doctor that Renko's contact told him to find, he is from 1951 and is stuck in the null zone, and appears to still be in his 1951 form, however he is aware of what is going on, not only that but has contact with the outside world, suggesting he can move outside of the building. Renko is told that the horrible outbreak was caused by someone who cause a terrible accident called the Singularity. It is for this unknown reason that the island got mutated. The doctor goes on to say that someone is en-route or already on Kortoga 12 attempting to use the Singularity to take over the world. He is told that this will backfire, essentially mutating and killing off the whole world.

The rest of the demo is essentially a tech demo, showing off the abilities of the TMD's powers. It is seen at one time resurrecting a whole building back into it's 1951 shape. The aging feature of the TMD has really changed from the GameInformer screenshots and instead of aging them until from old-to-skeleton-to-ash, into what looks like a forced combustion. The revert feature was shown more used with objects than humans. The TMD was able to revert an aged staircase back to new, and a new area was able to be explored.

The game ditches a standard regenerative life meter for a replenishable one, forcing players to take more time than with other regenerative health games. I like that fact and thought it worked well with Resistance 1, even though others see it differently. The game is listed by Activision to have a fall 2009 release date, however when pressed on a solid release date, Raven said the game is much more likely to come in 2010 (hence why the game takes place during then) than 2009. It'll platform on the PC, 360, and PS3