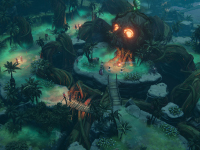 Get ready to hit the high seas in a who different kind of pirate adventure on the PS5, Xbox Series X|S, and PC with the announcement for Shadow Gambit: The Cursed Crew. This is the latest title to come from Mimimi Games that will be mixing up a lot of the tried and true stealth gameplay with some various new strategic gameplay. All so we can retell a new kind of story from an alternate history standpoint while seeing how our cursed pirates function in Shadow Gambit. Yes, these are not the normal pirates we have grown to enjoy over the years. Unless you have always been in for the pirates that have been given supernatural powers or made undead by some various curses out there. If it is the latter, then you are in for the perfect treat of things to enjoy.

As you might have gathered so far for Shadow Gambit: The Cursed Crew, our crew has been cursed and due to that have been given some extra powers. Not to mention that their boat also has some interesting time-manipulation powers too. All of which to aid us on our quest to defy the Inquisition that has a hatred for Cursed Pirates specifically. This is where in the game we will be able to explain the fact we can pull off some of the crazy moves and slow/stop time along the way to better plan and set things up. Something that will make Shadow Gambit a little easier and more exciting so we can have the whole crew take part in the action at one time. Have a look at the announcement cinematic to get a feel for what the team is going for even if it is not specifically gameplay.

Welcome to the Lost Caribbean! In this stealth strategy game, join a ghost ship with a living soul and assemble a cursed pirate crew. Embrace magical powers to defy the menacing army of the Inquisition, who stands between you and the mysterious treasure of the legendary Captain Mordechai.

Now we get to move on to the gameplay for Shadow Gambit: The Cursed Crew. It is a top-down tactical game at its heart, but with a bit more of planning and exploration on our side to go on. That is, we will need to scout out, plan, and then execute all of the crew's actions to try to stay hidden while going after the various mission goals. Some of which will have us making sure that we execute them in perfect order so we are not spotted or leave any evidence behind. If we do, though, our ship can whisk us back to fix that mistake. A mistake that is going to be on our side of things, as Shadow Gambit is stated to give us all of the information we need and it will be on us if we do not pull things off correctly. Have a look above at that longer gameplay to see it flow in action and how it should play out.

Are you interested in seeing what Shadow Gambit will bring to market when all is said and done or is the cursed pirate thing not your bag anymore? Will we always be able to pull off the perfect mission with the time warp mechanic or will that rest the whole encounter instead of just one little spot? How many members of the crew will we need to find along the way and will each be as vastly different as the ones we have been introduced to? Answer all of those questions and more in the comment section below and then feel free to discuss it. As more for Shadow Gambit: The Cursed Crew flows out there, we will share it with you here on the site. Just keep skulking around to keep as up-to-date on all of that as we are able to be.