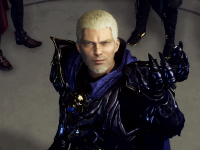 The journey is about to end in Stranger Of Paradise: Final Fantasy Origin, as the launch for the final DLC is here on January 27th to bring a close to the overall story we have been experiencing for a while now. It is all something that Team NINJA has been proud to bring us all on the PS4, PS5, Xbox One, Xbox Series X|S, and PC and the final showdown with the Emperor kicks off soon. I hope you have been gearing up for all of that and to see how this Final Fantasy origin story, of sorts, will bring it all full circle in the end. All while giving us some new mechanics and elements to try out too. Maybe so we can bring them into other playthroughs of the core game too. We will have to wait and see.

For those that have missed out on what is coming in this new DLC, we will be seeing new weapons, story, synthesis functionality, and three new Final Fantasy jobs to put to use in the game. Here we will get the Marksman, Hunter, and Gamble in the mix of things with all of them functioning about as we all assume they will out there. Yes, there looks like there will be even more firearms in the mix of the Final Fantasy titles out there. It is not something new to the IP, but we have a whole lot more to help us bring down the Emperor and end all of the Chaos out there in the world. That is what the whole game was always about since it first came onto the scene. Even if it does not seem like the best idea to remove all of that from the world out there…

Blast your way through an alternate time and space and ruin the Lufenian's plans while you're at it! Different Future will include 3 new jobs, weapons, and an added synthesis function to prepare you for an epic showdown against the Emperor!

Stranger Of Paradise: Final Fantasy Origin’s third and final expansion, Different Future will be available with a season pass on January 27th on PlayStation, Xbox, and Epic Games Store. A free demo is available on PlayStation 5, PlayStation 4, Xbox Series X|S, and Xbox One for download.

Experience the first three stages, multiplayer, and carry over your saved data to the full game.

Are you ready to bring down all of the Chaos in the world of Final Fantasy titles out there or will this be something that explains other aspects that carry between them all? Which of the jobs will you be looking to add to the mix of this story and will you want to use them in other parts of the game's life? How long will it take before someone figures out how to abuse the replication feature that is coming into the game here? We can talk all about this in the comments below and then let the discussion flow out there. For more on Stranger Of Paradise: Final Fantasy Origin, keep checking back on the site for it all. We might have more to share but this could truly be the end of it all for this part of the game.