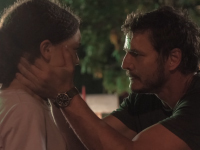 To kick things off, this is going to have some massive spoilers for The Last Of Us in terms of the game and the recent show on HBO. You have been warned before we start to go into the behind-the-scenes on how one of the most iconic sections of the story in both mediums came about, was created, and the impact it all has on the larger story. Those that have been a fan of Naughty Dog for a while now will know what we are talking about when we say it is the main introduction to the story and the start of the outbreak in the game. Also, those that have been watching The Last Of Us up to now too. Everyone else might want to take a pause before moving in to see how the teams involved brought such a memorable experience to life and show the world a Father's Love.

Now that we have that out of the way, the scene we are talking about for The Last Of Us is the one where Joel and Sarah are cornered and we get to see one of the most heartbreaking scenes ever. A scene that was originally planned late in the development cycle of the game and was supposed to play out differently with Joel leading the story already. It looks like the team had a great stroke of genius hit them as they opted to go down the path of getting to play out as Sarah in the game to add further impact. All so the live-action team could expand upon all of this and give the hit a little more impact on The Last Of Us. Originally, we had only minutes to learn about the characters before things turned south. The show takes that and gives us a whole "life in the day of" aspect so we get to know the characters more before we see them completely broken on screen. Have a look and see just how hard it was emotionally to film all of this originally and then again for the TV show that has been smashing us all in the feelings now.

The Last Of Us Part I is available for pre-purchase on PC via Steam.

The Last Of Us airs on HBO and streams on HBO Max.

How hard did this part of the story in The Last Of Us hit you and was it the same in the show? Would it all have hit differently had we only had Joel from the start and Sarah was only in the background or was this the choice that made it all feel completely different out there? Have you been able to stay spoiler-free on all of these things for the IP up to now and how has it been living under that massive rock shading it from you? Go ahead and discuss it all in the comments and try to keep the tears at bay. There is a lot more to come for The Last Of Us and we will be here to bring it all to you. Hopefully, the world will not end before all of this comes out there and we will be able to fully enjoy the emotional rollercoaster one more time.